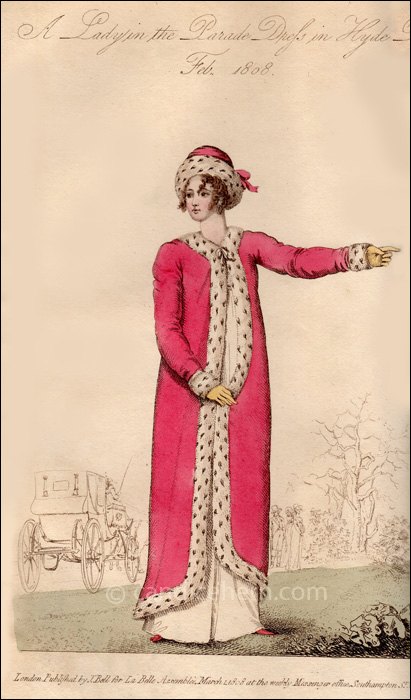 “A Lady in the Parade Dress in Hyde Park February 1808”

This print has an intriguing background, where you can see a fashionable carriage along with several well-dressed persons promenading through the park. This surely represents that very fashionable hour in the late afternoon when everyone went to Hyde Park — driving, riding, or walking — to see and be seen. The title at the top of the print indicating that this is a “Parade Dress” certainly suggests that this is a costume worn when “parading” through the park.

One has to wonder what this lady is pointing to. Has she seen something or someone (in which case, would it not have been rude to point?), or is she simply signaling to her coachman?

Ermine is used as a luxurious trimming for walking ensembles and muffs throughout the Regency period, as you will see if you browse through the Walking Dress prints on this site.

“PROMENADE COSTUME FOR HYDE PARK.  A round walking dress of white cambric, or brown velvet; made to sit close to the form; laced behind, and reaching to the edge of the throat, where it is finished with a broad plaiting of French net, or antique ruff of scolloped lace. Long full sleeves, trimmed at the edge of the wrist with correspondent cuff, and broad hair or coral bracelet. A Zealand coat of ruby, purple, or crimson velvet, made without a collar; flowing loose from the shoulders, and tied or confined with a brooch in the centre of the bosom; ends rounded in front, and reaching the bottom of the petticoat behind; trimmed entirely round with a full and rich ermine. Turban hat of the same material as the coat, turned up all round, bordered with ermine, and tied round the crown with a figured satin ribband. Hair cropt behind, and flowing in irregular curls in front. Shoes of crimson velvet; and gloves of York tan.”