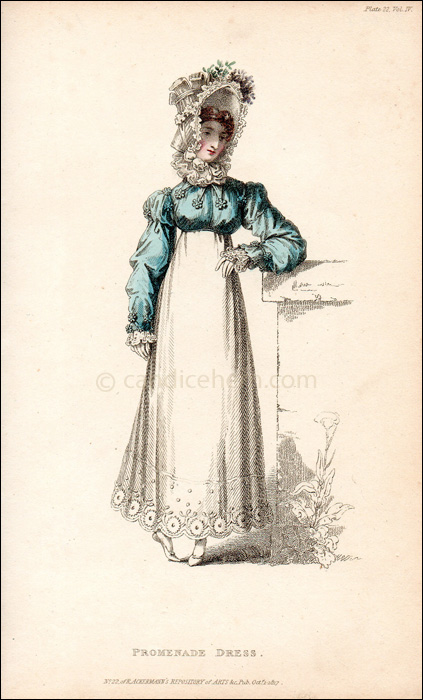 Almost half of the long description of this print is given to the bonnet, which is not surprising, as it it rather extraordinary!

Besides the size of the bonnet, other indications of recent changes in fashion are seen in the full, loose sleeve of the spencer, and the beginnings of a bell-shape in the skirt.

The “Charlotte spencer” was likely named after Princess Charlotte, who was very popular with the British people (who despised her father, the Prince Regent). She was pregnant, and the upcoming birth was highly anticipated. Unfortunately, a month after this print was published, the princess died shortly after giving birth to a stillborn son.

“A high dress of jaconet muslin, richly embroidered round the bottom of the skirt. The body [ie bodice, which we can’t see] is composed entirely of work. Long sleeve, finished down the arm in front by bouillons of lace. With this dress is worn the Charlotte spencer, composed of cerulean blue satin; it is tight to the shape, the back a moderate breadth, and the waist short. The sleeve is rather wide. The trimming is extremely elegant, and is disposed in so tasteful a manner, as to give an appearance of perfect novelty to the spencer. We are not allowed to name the materials of which it is composed. The sleeve is ornamented at the wrist, and on the shoulder to correspond. Bonnet à la Ninon, composed of French willow. The crown is fancifully ornamented with the same material, cut in small squares, edged with white satin, and turned a little over at the ends. The front is very large; it displays the front hair, which is simply braided across the forehead: it is edged with puffed gauze, disposed in points, and confined by a narrow fold of white satin. A spring of acacia ornaments it on the left side, and it is finished by white satin strings. French ruff and ruffles of lace. Blue or white kid shoes and gloves.

“We have again to acknowledge our obligations to Miss McDonald of 29, Great Russell-street, Bedford-square, for both our dresses this month.”