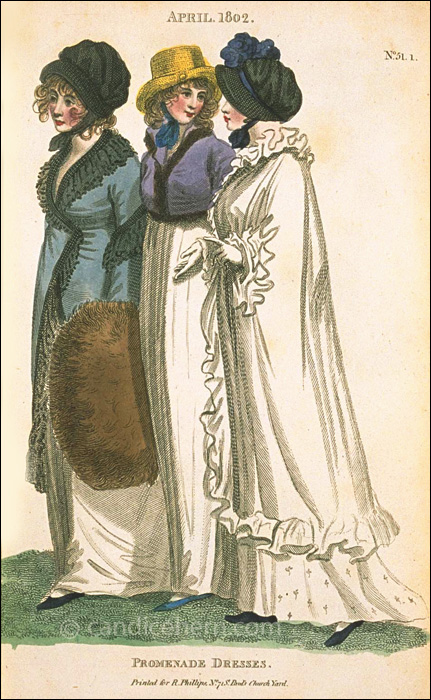 Fashions of London and Paris, April 1802.

This print is particularly instructive of the period as it shows three types of outer garment: the pelisse, the spencer, and the cloak. The General Observations, given below, state that cloaks are surpassing pelisses in popularity, but this is a short-lived trend. The pelisse becomes the most prominent outer garment for the next two decades.

Black is used here for trimmings and for hats. This is not due to mourning. At this time, black was simply a very popular colour.

“Fig. 2. — Dress of white cambric, made close round the neck with a collar. A spencer of lilac silk, trimmed with fur or lace. Large straw hat, looped up in front with a straw button, and tied under the chin with a riband.

“Fig. 3. — A round dress of sprigged muslin. Long cloak of cambric muslin, trimmed all round with muslin or lace. Close bonnet, trimmed and ornamented with lilac.”

After the print descriptions, the General Observations about fashion states the following:

“Long cloaks, of white muslin, have taken the place of pelisses; and Spanish cloaks, of white muslin, have also been introduced. Deep white veils are very general. Straws begin to be worn in a great variety of forms, chiefly large, and of the Gipsy and Spanish shapes. Lace is universal, and is introduced into all parts of the dress. The hair is dressed as last month, in light loose curls. The prevailing colours are straw, lilac, green, and blue.”