Fashions of London and Paris, October 1804. 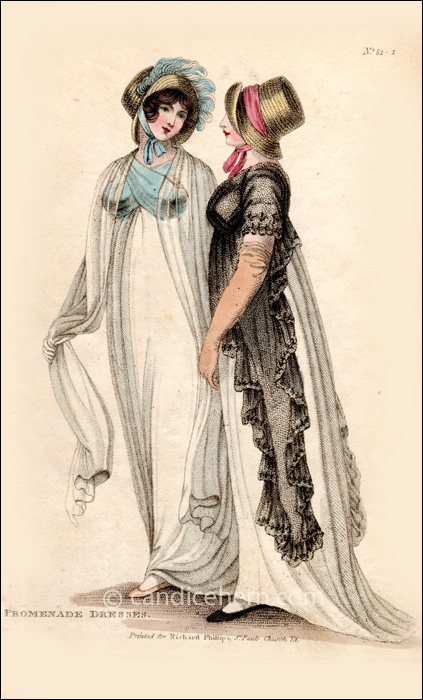 The scarf crossed over the bosom of the lady on the left and tied in back is a bit unusual. Fichus of the previous decade were sometimes worn this way, but it is somewhat uncommon in the new century, when spencers more typically served as an outer garment to cover the bosom.

The black lace spencer on the right-hand lady — called a spencer-cloak, presumably because of its extra length in the front and sides — is not a mourning article. Black lace was simply very popular in the early years of the new century.

“Fig. 1.–A round dress of white muslin, with long sleeves. A Barcelona handkerchief crossed over the bosom and tied behind. A scarf cloak of worked muslin. A straw hat, turned up in front, and ornamented with a blue feather.

“Fig. 2.–A dress of cambric muslin; the sleeves short and drawn up on the top of the arm, to form an epaulette. A black lace spencer-cloak, trimmed all round. A large straw hat, tied under the chin with a pink handkerchief.”

This article is featured in: Regency Collections ~ Within Collections: Walking Dresses