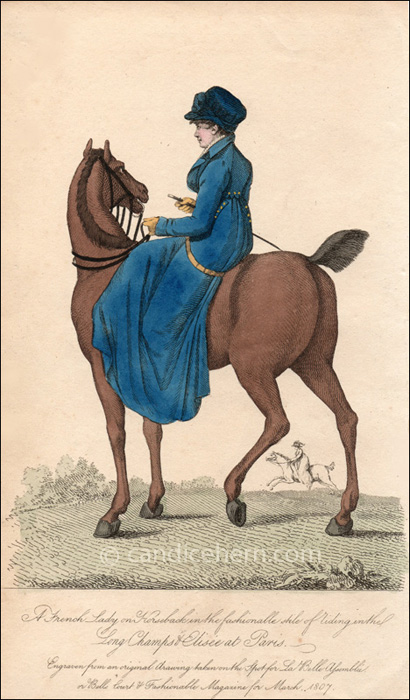 La Belle Assemblée
March 1807
“A French Lady on Horseback in the fashionable stile of riding in the Long Champs d’Elisée at Paris. Engraven from an original drawing taken on the spot for La Belle Assemblée or Bell’s Court & Fashionable Magazine for March 1807.”

“Represents a Parisian lady, mounted in the most fashionable style, for the Long Champs and Elysées, at Paris. “An equestrian habit of fine seal-wool cloth, with elastic strap; the colour blue (but olive, or puce, are equally esteemed), with convex buttons of dead gold. The habit to sit high in the neck behind, lapelled in front, and buttoned twice at the small of the waist; a high plaited frill of cambric, uniting at the bosom where the habit closes. A jockey bonnet of the same materials as composes the habit, finished with a band and tuft in front. Hair in dishevelled crop. York tan gloves; and demi-boots of purple kid, laced with jonquil chord.”