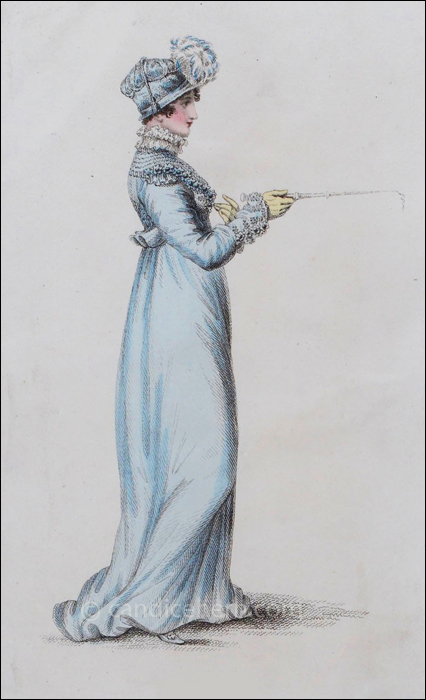 “We are indebted this month to the fertile imagination of Mrs. Bell for a most elegant and useful novelty — we mean the riding habit which she has just introduced. Habits have, ever since they were first brought into fashion, been considered as decidedly calculated to give even the most delicate female a masculine appearance, and the wits of our grandmothers’ days were unmercifully severe on the waistcoat, cravat, and man’s hat which were then the indispensible appendages to a habit; nor has the modern style of habit making, though less masculine, been more becoming. In the one now before us we are presented with an elegant and feminine dress, which is at once happily adapted for travelling and calculated to display to advantage the fine proportions of an elegant form, while a strikingly tasteful hat adds an air of smartness, without taking from the delicacy of a handsome face.

“The habit from which our print is designed was composed of the finest pelisse cloth, the body is formed in a most novel style, and the front and cuffs embroidered with much taste and originality; a very rich lace ruff of a new and peculiarly becoming form completes the habit. The hat is composed of moss silk, and ornamented with feathers to correspond; gloves and half-boots also to correspond. The tout ensemble of this dress is striking and tasteful beyond what our descriptive powers can portray, and we have no doubt that its striking utility as well as elegance will very soon render it a general favorite. At present it is adopted by some of the most distinguished fashionables of the haut ton.”