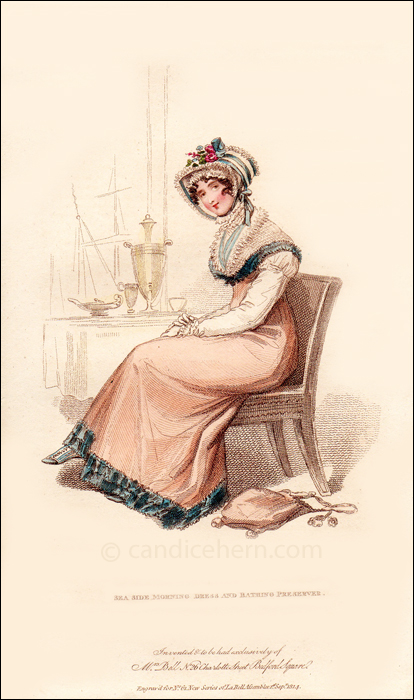 “Sea-Side Morning Dress and Bathing Preserver — Invented and to  be had exclusively of Mrs. Bell, No. 26 Charlotte Street Bedford Square”

The ubiquitous Mrs. Bell (inventor of the Circassian Corset, the Wellington Corset, and the Ladies’ Chapeau Bras) gives us yet another of her novel inventions, this time the Bathing Preserver. Unfortunately, it is kept in the bag on the floor next to the lady in the print, so we don’t get to see what it actually looked like. But it was apparently a garment to be worn while sea bathing, an alternative to the “nauseous” garments provided by the guides at the sea shore. Other sources indicate that such garments were simple muslin shifts. Mrs. Bell’s version was likely a bit finer, but more than anything, it was a private item, allowing its owner to forgo a nasty rented garment.

“High dress of jaconet muslin, the body closely gaged, and each gaging finished by a very small bobbin. Long sleeve, full at the top and plain at the wrist, which is finished by a narrow lace. Over this dress is worn a frock of pale amber washing silk, the form of which is extremely novel, tasteful, and elegant; it is sloped quite down to the bottom of the waist in front, and buttons behind. The trimming, which consists of blue satin ribband finished with fringe, is very prettily fancied, and the general effect of the dress is strikingly tasteful. A principal novelty, however, is the Wellington corset, which will be found particularly desirable for pregnant ladies, for ladies who have had families, or for those belles who are too much inclined to what the French term en bon point. It is totally free from the smallest appearance of stiffness, and displays the natural beauties of the figure to the greatest advantage, while at the same time it represents that fullness which some ladies find rather troublesome in the present style of dress; and affords to pregnant ladies the greatest comfort and support. Undress lace cap, the French Pamela bonnet of white chip, ornamented with flowers, edged with net and tied with a ribband to correspond with the trimming of the dress. Blue kid gloves; and fancy leather slippers or half-boots.

“The Bathing Preserver is a most ingenious and useful novelty for ladies who frequent the sea-side, as it is intended to provide them with a dress for bathing far more adapted to such purposes than any thing of the kind at present in use; and it will be found most necessary and desirable to those ladies who go to the sea-side unprovided with bathing dresses, and will relieve them from the nauseous idea of wearing the bathing coverings furnished by the guides. Mrs. Bell’s Bathing Preserver is made quite in a novel manner, to which is attached a cap to be removed at pleasure, made of a desirable silk to keep the head dry. The Preserver is made of such light materials that a lady may carry it in a tasteful oiled silk bag of the same size as an ordinary lady’s ridicule.”

This article is featured in: Regency Collections ~ Within Collections: Fashion Prints, Morning Dresses, Sea Side Fashions