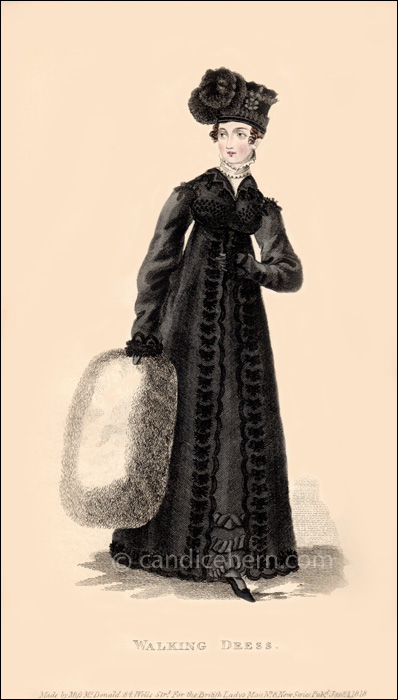 This print represents mourning for Princess Charlotte, who died in November 1817. (Though this magazine is dated January 1818, it would have been released in December 1817.) Though this looks like full deep mourning, it is actually what is called either “ordinary mourning” or “slight mourning,” which allowed some leeway in the prescribed rules of dress for full deep mourning for the death of a royal. In this ensemble, the use of satin trimming would have gone against the strict rules for matte fabrics, and the white habit shirt is something more typically worn with half-mourning. As is, perhaps, the white muff.

“Round Dress of black China crape, richly trimmed with crimped satin and crape, in fullings forming points; the body is made to fit the shape half high, trimmed with sarin in scollops; long sleeve, with cuff to correspond. Pelisse of fine black Saxony cloth, made tight to the shape, and richly braided: the skirt is scolloped round, and edged with satin, above which is a rich floss silk trimming. Collar, which turns back, edged with satin, and finished with tassels: the sleeve is rather tight, and the trimming of the cuff is like the pelisse. Epaulets of black bullion; French habit shirt made very high; hat of black crimped satin and velvet, with a handsome plume of feathers, richly crimped on the right side; swansdown muff; gloves and shoes of chamois leather.”

This article is featured in: Regency Collections ~ Within Collections: Fashion Prints, Mourning Attire