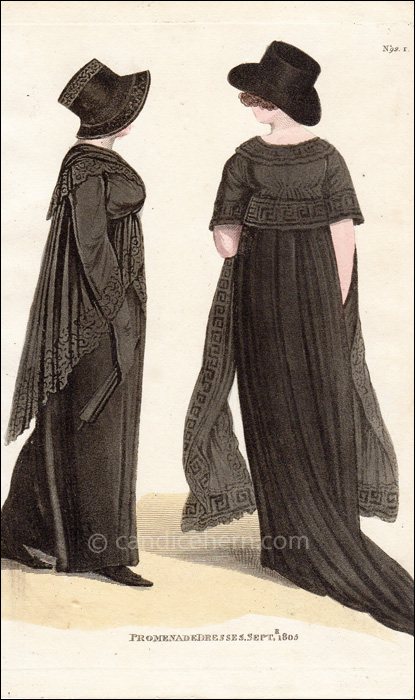 Fashions of London and Paris, September 1805.

The fashions for this month, in all the British publications that included fashion prints, showed full mourning. This was due to the death of the Duke of Gloucester, the king’s younger brother, on August 25. The Lord Chamberlain had declared that both Court and General Mourning should be observed beginning September 1.

The dresses shown here represent full or deep mourning, ie unrelieved black in fabrics with a matte finish. It is worth noting that these dresses are designated “Promenade Dresses,” which indicates they would have been worn during the fashionable promenade hours of late afternoon in Hyde Park, or other public places. So, deep mourning, at least for a public figure, did not require one to curtail all one’s social activities. The king did declare, however, that all the London theatres should remain closed until after his brother’s funeral.

In the General Observations in this issue of the magazine, it states: “So general is the present mourning, that not a colour of any description is to be seen.”