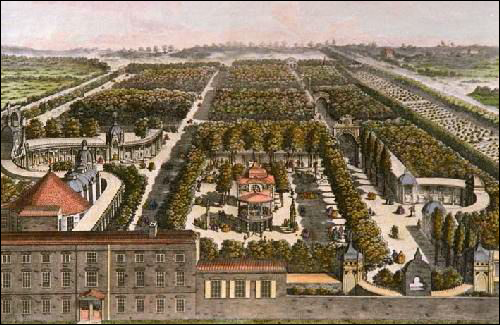 Vauxhall was one of the most important of the pleasure gardens in London from the 17th century through the mid-19th century. It was located on the south side of the Thames in Kennington, and was originally known as New Spring Gardens. They consisted of several acres laid out with walks, fountains, and pavilions. The main walks were lit at night by hundreds of lamps. Over time more features  were added: supper boxes, a music room, a Chinese pavilion, a  gothic orchestra that accommodated 50 musicians, folly ruins, arches, statues and  a cascade. The name Vauxhall Gardens, long in popular use, became official in 1785. The entertainments were continued every night throughout the spring and summer seasons. Admission was 3 shillings/6 pence in the early 19th century, and 4 shillings/6 pence in the 1820s. Entertainments during the Regency included hot air balloon ascents, fireworks, acrobats, and tightrope walkers. In 1813 there was a fete to celebrate victory at the Battle of Vittoria, and in 1827 the Battle of Waterloo was re-enacted by 1000 soldiers. Popular with all classes of society, Vauxhall Gardens was a noted venue for romantic  assignations in the “dark walks”. The gardens became less fashionable by the 1820s and began to deteriorate, finally closing in 1840. They changed hands and reopened in 1842, but closed for good in 1859.