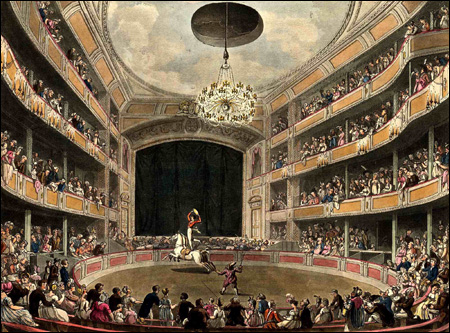 Philip Astley, a former regimental rough rider and riding instructor, opened his famous equestrian exhibition theatre in 1781. Its original name was Amphitheatre Riding House, then was changed to The Royal Grove, and afterwards to the Amphitheatre of Arts. But the name of Astley’s Amphitheatre, given it by the public, proved a more enduring epithet than any other. The amphitheatre mixed circus with theatre, having a circus ring attached to a stage and exploiting the circus tricks that horses could do. Astley’s was renowned for its historical, military, and equestrian dramas, which it continued to produce until its destruction in 1895. The large size of the stage space meant that it could produce huge military extravaganzas with hundreds of soldiers, horses and cannons.  Astley himself performed as the primary trick rider. To add novelty to his performances, he hired other equestrians, musicians, clowns, jugglers, tumblers, tightrope walkers, and dancing dogs, thus laying the foundations of the modern circus, as we know it today. He continued to manage the productions until his death in 1814, after which his son took over.