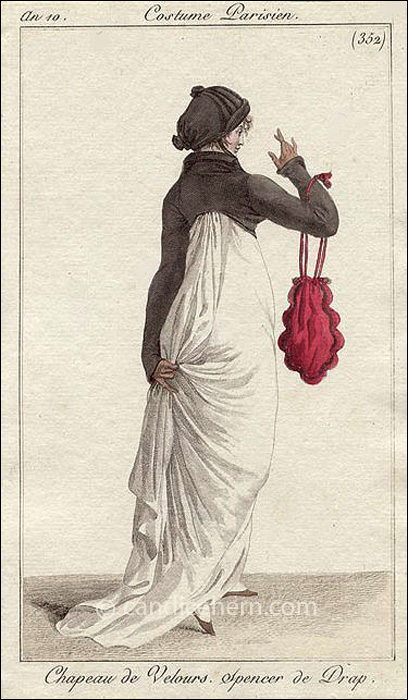 This early French print includes some lovely fashion details. The wool spencer is cut high in the back, showing the gathering at the back of the dress. For the next few years, the back of dresses tended to be quite full. And walking dresses at this time typically had short trains, as here. Since most dresses were white, one can only imagine the state of these long hemlines when worn outdoors.

The text in the magazine, as best I can translate, describes the standing collar of the spencer as in the form of a jockey’s riding coat. It does indeed show the sort of tailoring one would see in a riding habit. The velvet hat is also in a style known in England as a jockey cap.

The large ridicule, as it as called in the magazine (and in England at this time — the term reticule didn’t come into use until the mid-19th century) is described as scalloped-edged tulle. This example is a bit larger than most ridicules seen in fashion prints, but the the style of an open top gathered with long loops of cord or ribbon used as handles is very typical, and continues to be seen throughout the century. I suspect it was featured so prominently in the print in order to provide the home seamstress with a good notion of the scalloped shape. Ladies, or their dressmakers, often made their own ridicules to match a specific ensemble,