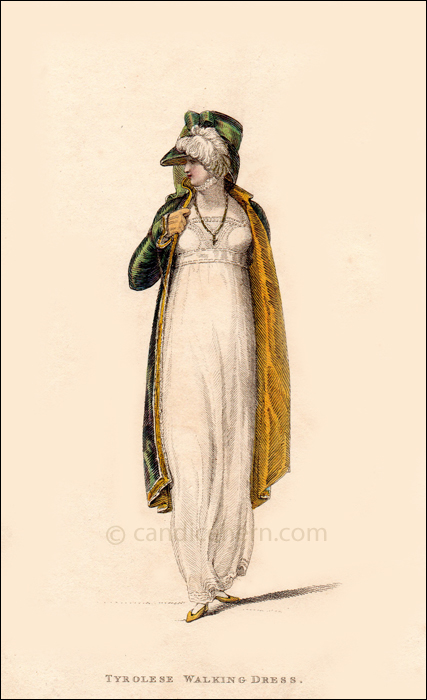 This coat is named in the description as a coat and not a pelisse, though I suspect either term would have worked. I’m not sure what makes it Tyrolese, or Tyrolean. It doesn’t look particularly Alpine to me.

One of the two colors suggested for the coat is one I have never seen before, but which I love: drake’s neck. I like to think that the drake in question was a mallard, which has a gorgeous glossy, almost iridescent green neck. Here, it looks fabulous with the amber lining.

“A fine cambric or jaconet muslin round robe, with long plaited sleeves, and worked antique front; bordered at the feet with needle-work or appliqued lace. Elastic belt, confined behind with a bow and ends of ribbon. A plain shirt, with high collar, sitting close to the throat, and trimmed at the extreme edge with a plaiting of French net. A rosary and cross of blended gold and amber. A Tyrolese coat of shaded green, or drake’s-neck velvet, lined throughout with amber sarsnet, and trimmed with gold or Chinese floss binding. The Amazonian helmet, composed of the same materials, ornamented with a patriotic band and bow, towards one side; a curled ostrich feather, tipped with gold, on the other. Slippers of amber velvet, with black bindings and rosettes. Gloves of York tan.”