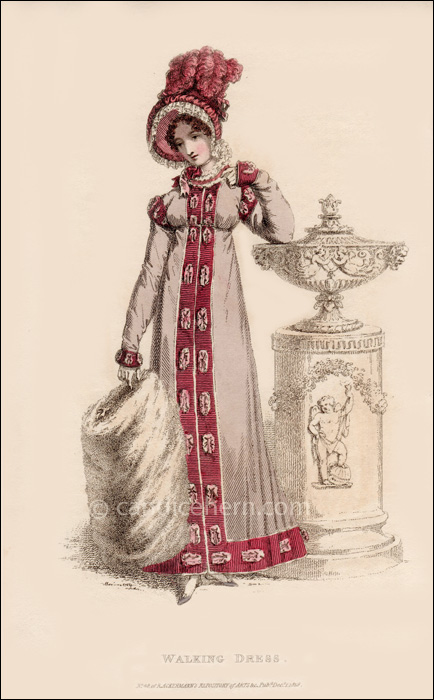 This beautiful pelisse is described in detail, but no mention is made of the dress underneath. Often, the dress is described even when we can’t see it. This pelisse, it seems, could have been worn over any style dress. It is certainly the star; what’s underneath doesn’t matter.

Levantine is mentioned several times in the description. This was a twilled sarsnet, introduced only a few years earlier.

“A PELISSE composed of kerseymere: the colour is a peculiar shade of grey; it is lined with white sarsnet. The body is tight to the shape, the waist is rather long, and the sleeve is set in so as to just touch the point of the shoulder: the sleeve is wide, and falls very much over tha hand. The skirt is moderately full, meets before, and fastens down on the inside. The trimming is composed of ruby-coloured velvet; it is of a new pattern, and exceedingly rich and elegant; it goes round the bottom, and up each of the fronts. The epaulettes and cuffs correspond with the trimming. High standing collar, trimmed in a similar manner. Head-dress, a bonnet composed of ruby velvet, intermixed with levantine: the crown is made of folds of these two materials, so disposed as to form a point in the center, which has a light and novel effect: the brim is large, and of a singular, but becoming shape; it is finished at the edge by a rich roll of ruby levantine, to which is attached a full fall of blond lace, set on narrow toward the ears, and broad in the middle of the brim: this style of trimming adds much softness to the countenance. A high plume of ostrich feathers, to correspond, is placed upright in front, and a rich ribbon tied it under the chin. Gloves to correspond with the pelisse. Half-boots, the lower part of black leather, the upper part grey levantine.”

After the description of the second print, the following note is added:

“For both these dresses we are indebted to Miss Pierpoint, No. 9 Henrietta-street, Covent-Garden, maker of the corset à la Greque.“