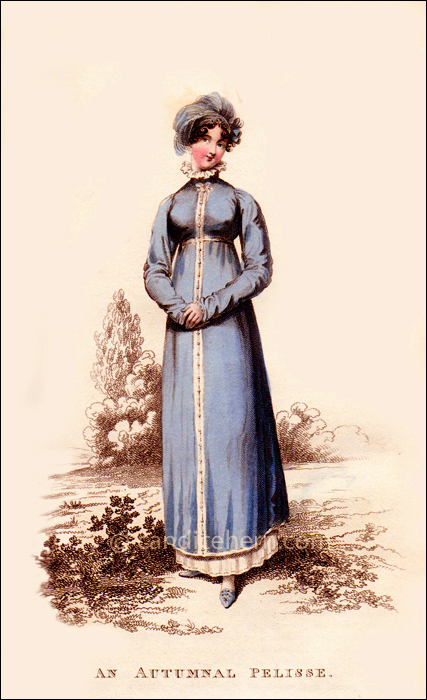 Princess Elizabeth, after whom this pelisse is named, was the seventh child of George III. All of the king’s daughters had very strict and sheltered upbringings. Perhaps as a show of independence, in 1812 the 42-year-old Princess Elizabeth purchased a home in Berkshire as her private residence. As that is the only significant news related to the princess in 1812, perhaps that brought her name enough into royal gossip to suggest naming a garment in her honor.

“A pelisse of Princess Elizabeth lilac figured sarsnet, shot with white, and sufficiently short to show the flounce of the morning dress beneath it: it is made rather fuller than has been worn, the waist moderately long, and buttoned all the way up with rich silk buttons; collar rather full, and a bow of figured ribband tied at the throat; fastened at the bottom of the waist with a silver clasp in front; sleeves very long and full.  A ruff, either of scalloped lace, or rich work, but to the latter we strongly object, as it looks very heavy, and indeed is not so general as lace. Lilac gloves and shoes. Small Spanish hat of the same silk as the pelisse, ornamented with three ostrich feathers, which fall to the right side, a large bow of figured ribband on the left.”