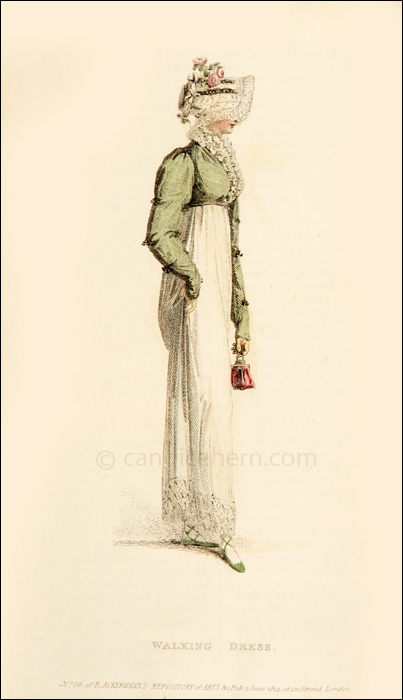 The “Oldenburg bonnet” is named for the Duchess of Oldenburg, sister of Tsar Alexander I of Russia. She was one of the most popular of the noble visitors who came to London in June 1814 to celebrate the fall of Napoleon and his exile to Elba.

“A high round dress, of short walking length, made of French cambric or worked muslin, trimmed at the bottom with a treble flounce of Vandyke or shell needlework; a long loose sleeve, with corresponding trimming at the wrist; a short wide ribband sash, tied in front; a shell lace or worked muslin ruff. Spencer, without collar, composed of striped Pomona sarsnet, ornamented round the neck and down the front with tufts of blond lace; the fulness of the sleeve drawn in on each side three or four times down the arm, and confined by a silk tassel of similar colour to the spencer. An Oldenburg bonnet, formed of white figured satin, inlet with blond lace, ornamented with a full trimming of the latter round the edge, and bows of white ribband round the crown,with a cluster of rosed on one side. Half boots or sandals of Pomona satin. [Sandals are shown in the print.] Gloves, pale tan or Limerick.”

After the description of the second print (seen here) is the following statement:

“Mrs. Bean, of Albemarle-street, so justly celebrated for chaste elegance of taste and novelty of fashion, is the inventress of these dresses.”