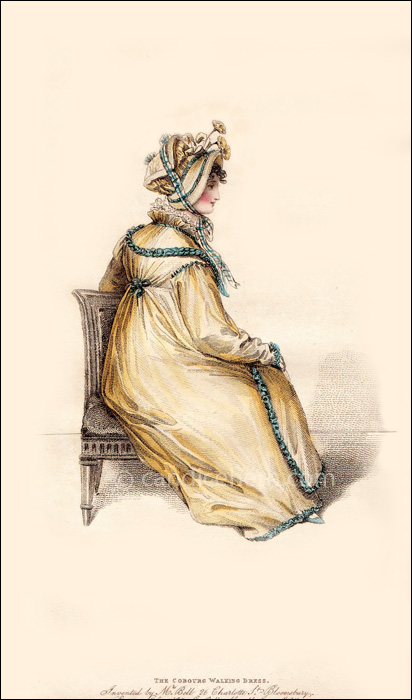 Several fashion prints of this year invoked the name “Cobourg.” In March of 1816, Princess Charlotte, the Prince Regent’s daughter and only offspring, was engaged to Prince Leopold of Saxe-Cobourg-Saalfeld. They were married on May 2, probably just before this issue of the magazine was released, in time to include reports of the wedding dress. (The fashions are always shown for the next month, ie this print of June fashions was published in the May issue of the magazine. On this site, I always date LBA prints based on the provenance at the bottom of the print, as here: June 1816.) The famous wedding dress is pictured as the frontispiece of the next issue of the magazine.

The married couple became known as “the Cobourgs.” Hence the popularity of Cobourg hats, Cobourg mantles, Coburg pelisses, etc. In this print we also see the Oatlands hat, named for Oatlands Palace, the Duke of York’s residence in Surrey, where the couple honeymooned.

“Round dress of fine French cambric under a pelisse of amber shot sarsnet, elegantly ornamented in a novel style with blue satin ribband. Oatlands hat to correspond with the pelisse, tied with a chequered ribband of blue on white, and the hat surmounted with a bunch of tuberoses or Passion flowers. Morocco shoes or half-boots of light blue the colour of the pelisse trimming. Limerick gloves; and hair dressed forward in curls.”