Ackermann’s Repository of Arts, May 1810. 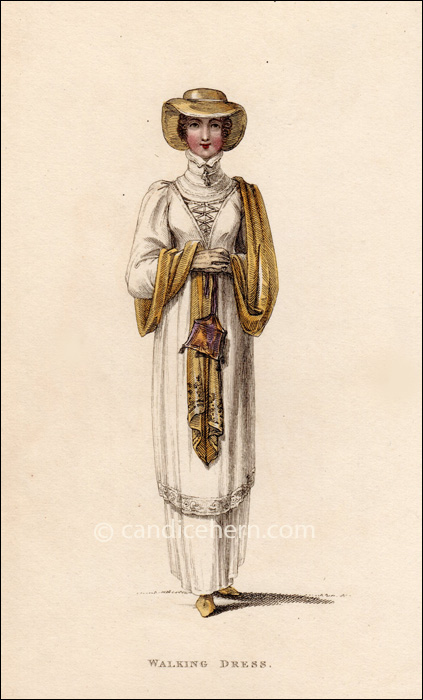 This “Egyptian” style dress demonstrates that the passion for all things Egyptian was still holding strong, a dozen years after Nelson defeated Napoleon at the Battle of the Nile. This dress is somewhat unusual, and may have been deemed slightly exotic in its day.

The tunic and under-dress are made of cambric, which was a fine linen, so this would have been a very elegant, and probably expensive, ensemble.

It is interesting that the hat is made of fabric, though it looks like straw. I suspect the fabric was stiffened.

“PROMENADE COSTUME IN THE EGYPTIAN STYLE.  An Arabian tunic and petticoat of fine white cambric, sitting high round the throat, with appliqued net, in the crescent form; robin stomacher, and Egyptian border round the bottom. An Armenian hat composed of short amber sarsnet, with white floss binding and cord. Grecian scarf of the same colour, with rich brocade ends. Hal-boots of amber-coloured kid or silk, the same as the hat. Gloves of York tan or buff kid.”