Fashions of London and Paris, November 1799. 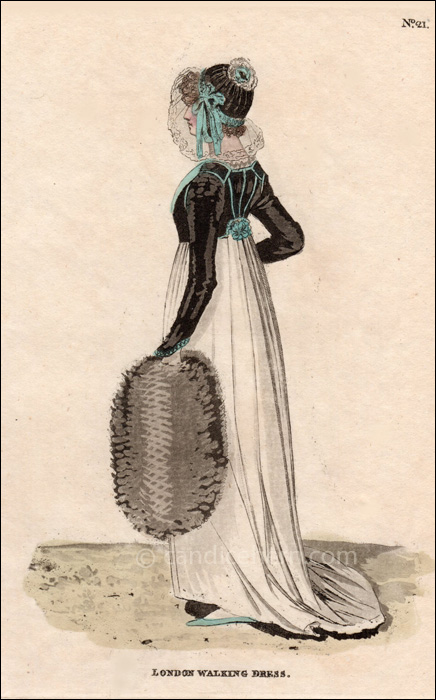 What looks like a spencer is called, in the description, a Swiss corset. In this case, the term corset does not refer to an undergarment. It refers to a close-fitting bodice. So, it woulds not be an outer garment, like a spencer, that could be removed. It is an integral part of the dress. I am glad that it is shown from the back, giving us a view of the lovely blue piping. Beneath the piping is a large bow of the same color.

The hat is called a bonnet à la Repentir, which translates as a Repentence bonnet.  I have seen that term in early Costume Parisien prints, but I have no idea what one would repent in wearing such a bonnet.

Note that in this early period,  even a walking dress often included a demi-train. As the majority of dresses were white, the hems must have been perpetually dirty.

The print is described, very briefly, in the magazine as follows: