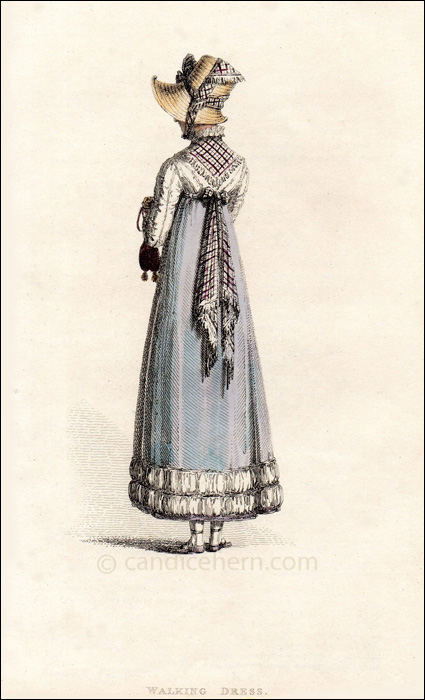 The high crowned bonnet is typical of 1814. It is cited in the text as a Shipton bonnet. Apparently it was named after Mother Shipton, a 16th century soothsayer and prophetess, who became a popular figure of pantomime during the early 19th century. An 1804 print, based on a much earlier painting, shows Mother Shipton in a broad-brimmed hat.

The shoes here are called sandals, which at this time simply meant that they laced up over the ankle. They look charming, even if shown on impossibly tiny feet!

Note the reticule (called ridicule at this time) held in her hand.

“An evening primrose-coloured French sarsnet petticoat, trimmed round the bottom with a double row of clear muslin, drawn full with a narrow ribband of corresponding colour to the petticoat; high body [ie bodice] of jaconet muslin, with reversed drawings; long sleeve, drawn to correspond. A silk ruff. A silk net handkerchief-sash, tied in streamers and small bows behind. A Shipton straw bonnet, tied under the chin with a net handkerchief crossing the crown, and trimmed with a band of the same silk net. Sandals of evening primrose-coloured silk. Gloves to correspond.”