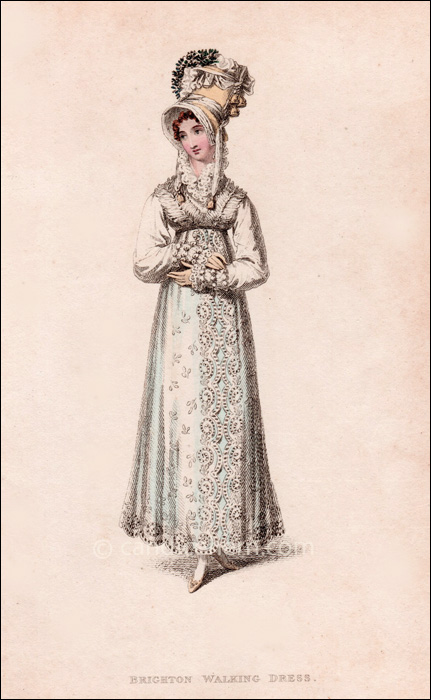 This rather wild and crazy bonnet is made of leghorn, a fine plaited straw made from an Italian variety of wheat. The name specifically refers to the type of straw, and not the shape of the hat, as is often incorrectly assumed.

“Jaconet muslin round dress over a French grey sarsnet slip. The dress is richly worked round the bottom and up the front.  High body, composed of alternate strips of byas-tucked muslin and letting-in lace. Long sleeve, finished at the wrist by rouleaus of worked muslin, each rouleau edged with narrow lace. Over this dress is worn the Blandford spencer, composed of white queen’s silk. We refer our readers to our print for the form of this spencer; it is trimmed, in a very novel and tasteful style, with white satin and braiding. Fichu of white gauze, very full, trimmed with tulle. Blandford bonnet, composed of Leghorn: the crown is rather high, the front of a moderate size, and square at the ears; it is lined with white satin, and trimmed with the same material and Leghorn tassels, a bunch of which is placed at the left side. A full bunch of blue fancy flowers ornaments it in front, and it is finished by white satin strings. The shape of this bonnet is peculiarly novel and becoming. Pale yellow slippers, and Limerick gloves.”

The section entitled GENERAL OBSERVATIONS ON FASHION AND DRESS begins with this statement, explaining the title of the print:

“Few of the fair votaries of ton remain in town at present; Brighton, Cheltenham, and other places of fashionable resort for the autumnal months, are crowded, and it is from them that we must select models of taste and elegance to present to our fair readers.”