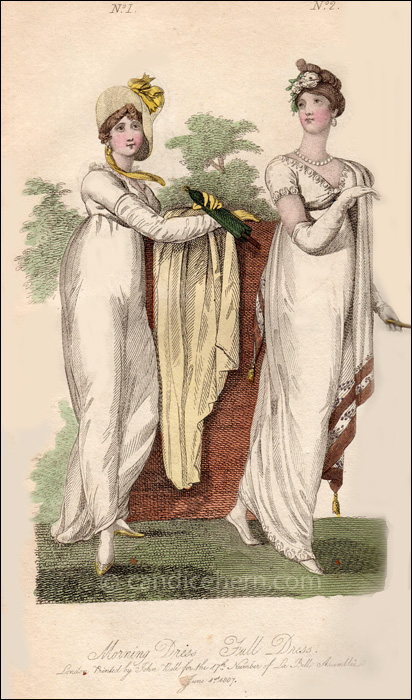 You might think the portable umbrella a 20th century invention, but they have been around since the early 18th century. They might not have had a button that automatically opens it, as ours do today, but they did have collapsible handles and folding canopies. The figure on the left holds such a portable parasol.

Note also that the same figure’s dress appears to have detachable sleeves, which would allow the dress, with appropriate accessories and jewelry, to be converted into evening wear.

“No. 1.–MORNING WALKING DRESS. A plain round gown of French cambric, or jaconet muslin; long sleeve, wrapt front, and spenser back. Open shirt, frilled round the neck with scolloped lace. Mountain hat of straw, or Imperial chip, trimmed with jonquille ribband. Shoes and gloves to correspond. Flemish mantle of twill sarsnet. Gold hoop ear-rings; and patent parasol of shaded green.

“No. 2.–FULL DRESS. A round robe of white Italian crape over white sarsnet; with frock back, plain sleeve, and pointed front; trimmed round the bottom, bosom, and sleeves with an elegant border, composed of the pearl bead, blended with green foil and gold. The robe confined at the center of the bosom with a brooch formed of a single pearl. One row of the same forms the necklace, which is fastened with an emerald snap. Hoop ear-rings, and bracelets to correspond. Hair à-la-Madona on the forehead, twisted behind, and flowing in full curls on the crown of the head; a bunch of white roses in front, inclining toward the right side. Gloves of French kid; shoes of white satin, with silver trimming. Square shawl of Chinese silk, with a rich pointed border; finished at each point with correspondent tassels. The style of wearing this graceful ornament is, simply giving it a twist from the cross corners, and flinging it negligently over the left shoulder; thus one point ornaments the figure behind, with the others, falling irregularly, form a drapery on the left side, and gracefully occupy the right hand. Chinese fan of frosted crape, with ivory sticks, carved in Egyptian characters.”