Fashions of London and Paris, September 1798. 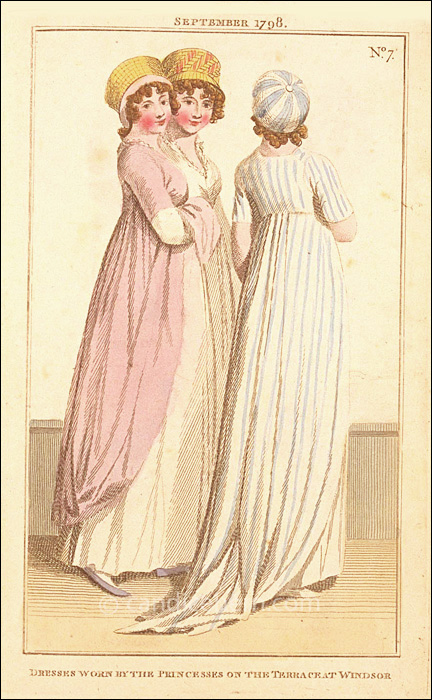 “DRESSES WORN BY THE PRINCESSES ON THE TERRACE AT WINDSOR.”

It is interesting that the dresses are not described at all, except to note that they are neat and plain. All of the description is given over to the bonnets.

“Dresses worn by their Royal Highnesses the Princes Augusta, Elizabeth, and Mary on the Sunday evening promenade on the Terrace at Windsor.

“The robes, according to the customary etiquette of ladies of the court in the afternoon dress, of taffety, or other summer silks. Extreme neatness and plainness characterized the tout ensemble not only of the Princesses, but of Her Majesty and all the ladies of quality upon the Terrace.

“The first hat a plain straw, lined with lilac, and turned up in front. A second made of pipe straw, interwoven with white satin ribbon and chenille, and lined with lilac. The third an oval shaped bonnet, made of plaited  blue and white crape, from the top to rim; a tassel at top, and a sprig in front.”