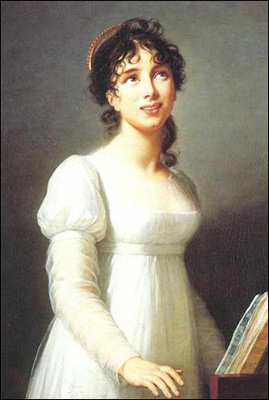 The famous Italian opera singer was already a huge star when she came to England in 1806, where she reigned as an unrivalled prima donna for seven years. She performed in Paris before coming to London, and Napoleon was so captivated by her voice that he refused to allow her a passport to leave. Determined to honor her London commitments, she disguised herself as a nun and found passage to England. She was an immediate success when she performed at the King’s Theatre in Haymarket. In 1812, she performed Susanna in the first London production of  Mozart’s Le Nozze di Figaro. Journalist and essayist Leigh Hunt described her as “a Roman with the regular Italian antelope face (if I may so call it); large eyes, with a sensitive elegant nose and lively expression.” In fact, she was considered quite beautiful, and her rare combination of beauty and talent was often noted. Her voice was a soprano of the purest quality, embracing three octaves, and was described in the press as “full, rich, and magnificent beyond any other voice ever heard.” The London public adored her, and she was wined and dined by the highest levels of Society.