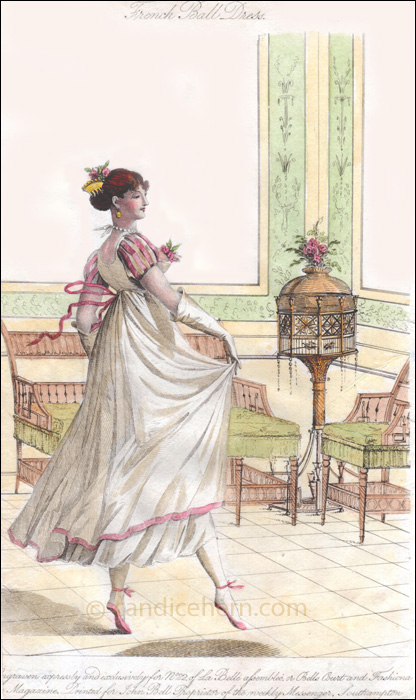 This print is intriguing for many reasons. First, it’s the only copy I’ve ever seen that was hand-colored. All copies I’ve seen in person and on-line have been black-and-white. La Belle Assemblée at this time had both colored and black-and-white prints in the same issue. In all the copies of this issue I have seen, this print is shown uncolored while the other print for this month is shown colored. So, the questions is: Was this one of the few copies of this print that was hand-colored at the time of publication, was it hand-colored by the lady who originally owned this issue of the magazine, or painted by some later owner? I’d like to believe the hand-coloring to be contemporary with publication, but I am skeptical. 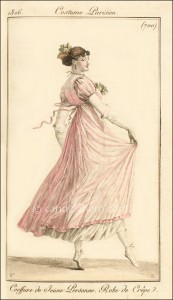 The other intriguing thing about this print is that, like so many other fashion prints in British magazines, it was copied from the French publication Journal des Dames et des Modes. But unlike most “borrowed” prints, this one was significantly altered. The original French print, seen here, was published in the February 5, 1806 issue. (Click on the image to see a larger version.) As you can see, it shows the dancing figure against a plain background. The La Belle Assemblée print shows an elaborate background, including a settee, a chair, and a birdcage. Though the French artists sometimes included a few background details, especially in the early years, they more typically just let the fashion speak for itself, against a plain background. One has to wonder if the unknown British artist was simply showing off his skill by adding such a complex background. Personally, I think the plain background does more justice to the very pretty dress.

The La Belle Assemblée, print is described in the magazine as follows:

“PARISIAN DANCING FIGURE. A round frock of Italian crape, over a white satin slip, ornamented at the bottom with a pink and silver ribband. June 1811; a plain bosom cut very low, trimmed tel que la robe. The melon sleeve, formed of alternate stripes of pink satin and white crape; a narrow sash of pink ribband, tied loosely behind. Hair combed straight from the temples, and leaving a few simple curls on the forehead, is formed in full braids at the back of the head, confined with a coronet comb of pearl, and ornamented with a bunch of auricula or clove-carnation. A bouquet composed of the rose and myrtle. Necklace, earrings, and bracelets of fine Chinese pearl. Gloves of French kid, and slippers of pink satin tied round the ankles with silver ribband. Plain silk stockings, a French white.”