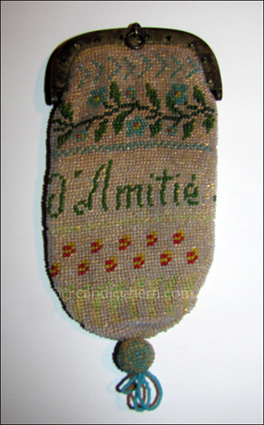 The purse as an essential feminine accessory came into prominence in the late eighteenth and early nineteenth century when the line of dresses narrowed and the waistlines rose. Prior to that time, women had worn pockets under their skirts. These were large flat bags with long vertical slits, which were tied around the waist and sat atop the petticoat. They were reached through a slit in the skirt. The width of the skirts allowed room for any number of bulky items to be kept in the pockets. As the skirts narrowed, however, bulging pockets ruined the elegant line and became unfashionable. (Pocket slits can still be seen in early nineteenth century dresses, but the pocket itself could not have held much without spoiling the line.) The reticule developed as a result: a bag carried outside the dress.

Reticules soon became an essential accessory, and in as many varieties as a modern handbag. Many were as large and bulky as pockets had once been, but these were generally considered unwieldy and awkward for evening wear. The tiny, flat coin purses — called sovereign purses in England — often kept inside the larger reticule or hung from a chatelaine were sometimes pretty enough to double as an evening bag. These are the purses represented in this collection. 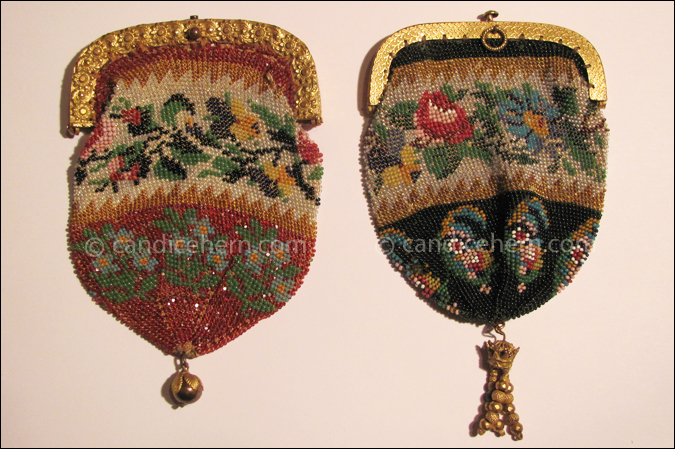 Figure 2
Two early 19th century examples of a popular pattern that continued in use for over 100 years. Finely knitted beadwork. Pinchbeck frames and tassels. Each approximately 3″ x 2″.

These tiny sovereign purses were made of various materials, though beaded bags were the most popular. The style of beaded purse in this collection was first seen around 1800, and could still be seen over 100 years later. The earliest beaded chatelaine or sovereign purses were quite small, generally no more than 5” long. Just big enough for a few coins. 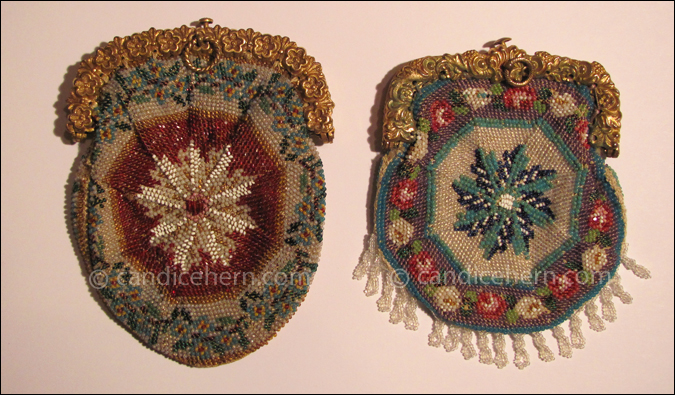 Figure 3
Two examples of a common sunburst or pinwheel design used for round or pie-crust shaped purses. Finely knitted beadwork. Beaded fringe on one. Pinchbeck frames. Each approximately 3″ x 2″.

Beaded purses could be purchased or made by hand. The small sovereign purses almost always included a metal frame. Lightweight frames of silver, brass, steel, and pinchbeck could be purchased, sometimes including a matching chain, and fabric bags could be stitched onto them. Patterns for beadwork, or full beadwork kits, could also be purchased. The most common types of beaded purses in the early nineteenth century were knitted, crocheted, bead embroidered, tambour beaded, or loom woven.

The popularity of certain patterns continued throughout the nineteenth century. (Figure 2) Those purses with chains attached to the frame could have been suspended from a chatelaine or held on the wrist as an evening purse. (Figure 4) Those without chains could have been tucked into a larger reticule or pocket, or may possibly have once been connected to a chatelaine ring. (The use for the tiny ring in the center of some frames is not clear.) 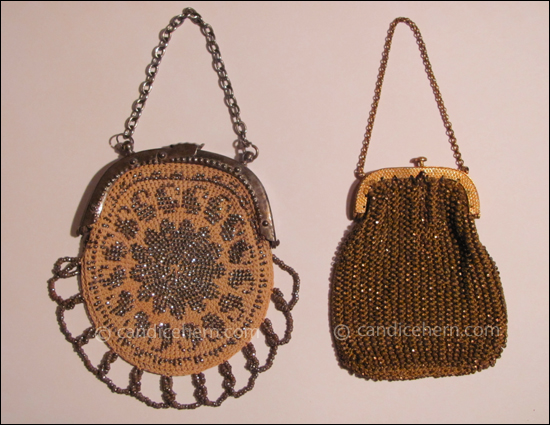 The purses in this collection all date from c.1800-1825. All were purchased in England and assumed to be English in origin.