Click on images to see larger versions and to read more detail about the purses.

Miser purses — also called long purses, stocking purses, or ring purses — were popular in England and France from the mid-18th century through the early 20th century. Their fast and easy construction meant that they were made in the thousands, and are therefore easily available to collectors. (If you do decide to collect them them, however, beware that because of their long popularity, it is sometimes difficult to tell if one was made in 1800 or 1900. If you study enough of them, you can learn to recognize the older ones.)

A miser purse has a long, narrow, tubular shape, often wider at the ends and narrow in the middle.  The narrow middle section had a short slit opening. The purse was pulled through two metal rings, called sliders. Both rings are slid to one side, coins are inserted through the opening into the other end of the tube, then one of the rings is slid tight against the end to secure the coins inside. Coins would be inserted into both ends in this way. The rings ensure that coins cannot escape through the central slit. 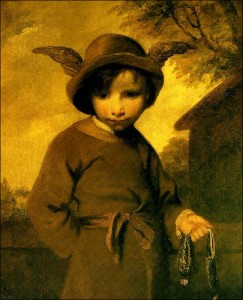 Some scholars believe the design of the purse was a revival of the Medieval practice of carrying one’s coins in the toe of a stocking. A similar tube-shaped purse fastened with rings at each end had been popular with men during the 16th century. It is not entirely clear how the nickname “miser purse” came about. One theory is that they were so called because they were made to disgorge a single coin or just a few coins at a time, or because the design ensured that coins were secure and difficult to lose.

The miser purse was carried by both men and women. In the 18th century, men sometimes wore them hidden inside a sleeve, which is another possible source of the name “miser purse.” They also thrust them into pockets, as did ladies. Later, when the waistlines of dresses crept back down to the natural waist, miser purses were sometimes worn folded over a lady’s belt. 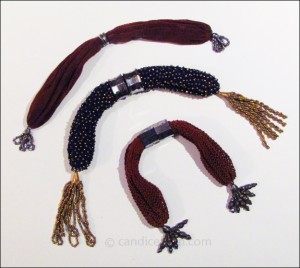 Figure 2, painted in 1774, shows an example of a knitted and beaded miser purse, which must have been a familiar image to 18th century viewers. It is very similar to many of the purses in this collection.

The miser purse was either knitted, netted, knotted, or crocheted, using silk, cotton, wool, and sometimes metallic thread. They were often beaded. The two ends were usually decorated with beads or tassels or fringe. The earlier purses typically had two identical ends. Victorian purses often have each end decorated differently, so that one could easily tell which type of coin was in each end of the purse.

Several scholars contend that purses with different style ends — for example one rounded and one flat, or one tasseled and one fringed — was typical of early purses. But paintings such as the one above and several Regency era fashion prints in my collection show purses with identical ends. Scholars also often state that early purses weren’t beaded. And yet the Reynolds’ painting above from 1774 clearly shows a beaded purse.  More scholarship on this topic is obviously needed. 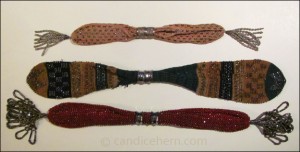 The purses vary in length from as short as 8 inches to as long as 36 inches. The longer sizes were generally seen later, in the mid-19th century, and were most often the type worn folded over a lady’s belt. Fashion prints from the 1860s and 1870s sometimes show enormous miser purses, though the smaller sizes continued to be popular throughout the years. The purses shown here vary in size between approximately 9″ long to approximately 17″ long. Click on the images to read more detail about the sizes and materials of the purses.

One of the reasons for the long popularity of the miser purse was that it was fairly easy to make one, and it became fashionable for young ladies to net or knit purses to give as presents, especially to gentlemen. William Cowper wrote a poem to his cousin Anne Bodham “on receiving from her a network purse made by herself.” This would have been a miser purse. During the mid-19th century through the early 20th century, ladies’ magazines often published instructions and patterns for constructing miser purses.

Thomas Gardon, a watch chain and purse maker on St. James Street, London, was one of the many vendors who provided all the necessary materials for purse-making. In the first years of the 19th century, he advertised that “Ladies may be accommodated with great choice of Purse-Twist, Tassels, and Sliders.” In fact, almost every issue of La Belle Assemblée in my collection includes advertisements for purse-making materials, including sliders, which were only used for miser purses. Clearly, it was certainly a popular Regency craft. This is confirmed by Mr. Bingley in Pride in Prejudice when he said that all accomplished young ladies “paint tables, cover screens, and net purses.”