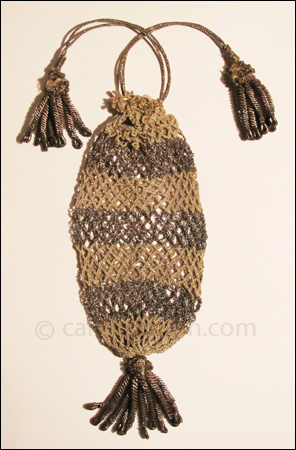 This article features another subset of my collection of Georgian sovereign purses. These tiny coin purses came to be called “sovereign purses” after the introduction of the gold sovereign coin in 1817, but had been around for much longer. During the 18th century, ladies kept all their essentials, including coin purses, in large pockets underneath their dresses. When skirts narrowed and no longer allowed for the bulky pocket underneath, women began to carry bags outside the dress. These bags were first called “indispensables” and later “ridicules,” which by the mid-19th century had become the more familiar “reticules.” Small coin purses were often among the items kept in a reticule. This collection features purses that were netted or knitted.

Netting was a popular pastime from the mid-18th century through the early 19th century, and was practiced by both men and women. Whereas men generally worked on utilitarian nets for use in fishing, hunting, or gardening, the favorite object for women was the netted purse. In Jane Austen’s Pride and Prejudice, Mr. Bingley is impressed with the accomplishments of young ladies, and says, “They all paint tables, cover screens, and net purses.”

Silk was the favored thread for netting, though linen, cotton, and wool were also used. Purse silk or “twist” could be bought from specialist shops. James Turner, a watch string and purse maker in Bloomsbury, advertised “the finest Silk Net Work, long and short purses.” Thomas Gardon, another watch chain and purse maker on St. James Street, advertised that “Ladies may be accommodated with great choice of Purse-Twist, Tassels, and Sliders” as well as “every other Article in the Netting branch.” 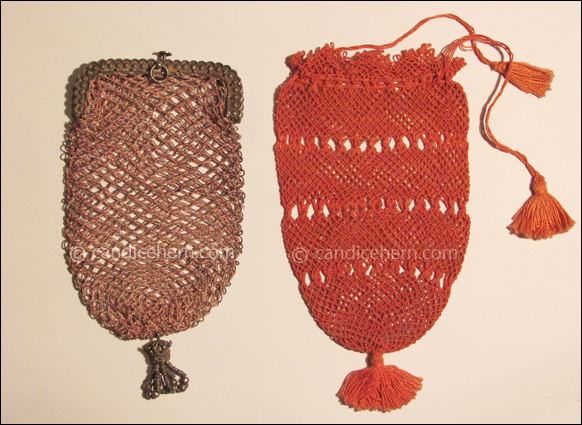 Figure 2
Left: Netted purse of pink silk and silver metallic thread attached to a sterling frame. Tassel at bottom of purse is composed of loops of steel beads beneath a tiny sterling crown that matches the frame. 3 ¾” long, not including tassel. The frame is hallmarked for 1816.
Right: Netted drawstring purse of red silk. The silk is gathered and tied into tassels at the ends of the drawstrings and at the bottom of the purse. 4″ long, from drawstring to tassel knot. c1800.

Besides silk twists, special shuttles were required, as well as gauges for different sizes of mesh. Some netting was quite open, as in Figures 1 and 2. Other netting was extremely fine, as in Figure 4, right.

In the late 18th century there was a particular vogue among women for presenting hand-made purses to gentlemen. William Cowper wrote a poem to his cousin Anne Bodham “on receiving from her a network purse made by herself.” Most of the purses made for gentlemen were netted stocking purses, sometimes called miser purses. (See the Collections article on Miser Purses.) 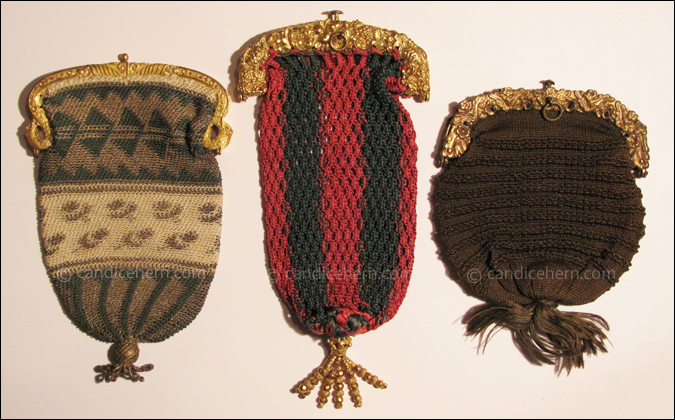 Knitted purses were also popular throughout the 18th and 19th centuries. Fine steel needles were used for delicate knitted silk, as for the purse in Figure 3, right. Metallic thread was sometimes woven in, as shown in Figures 1, 3, left, and 4, left, as were beads of colored glass or steel. By the late 1820s, some purses, or parts of purses, were crocheted rather than knitted. (Figure 3, center)

The simplest style of netted or knitted purse was the drawstring (see Figures 1 and 2, right). Framed purses (see Figures 2, left and 3) came into popularity around 1810. Purse frames were made of silver, riveted steel, gilt metal, or pinchbeck (an alloy of zinc and copper, imitating gold). The frames were hinged, fastened by a hooked catch, and released by a press button. (That press button is a good indication of a pre-1840 purse.) Some of the frames include a tiny ring, which may have been used to attach the purse to a chatelaine. 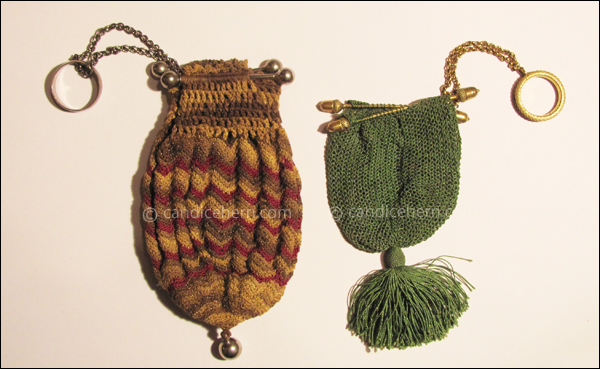 Finger-ring purses (see Figure 4) had been around for centuries, but experienced a renewed popularity at the end of the 18th century. They were very tiny and could hold only a coin or two, but left the hands free when the ring was slipped on a finger. They disappeared by the second decade of the 19th century, only to reappear with even greater popularity in the late 19th century through the early 20th century.

All the purses in this collection were purchased in England and assumed to be English.