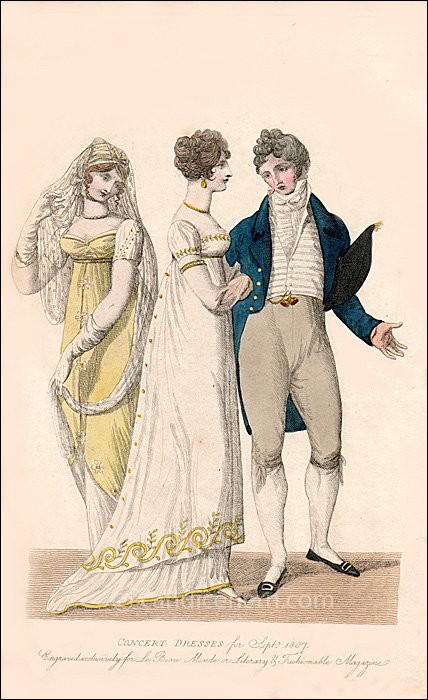 Normally dresses worn to a concert, like those worn to the Opera, would be considered Half-Dress. But these dresses are described with such opulence — pearls sewn onto the dress, gold embroidery,  diamond accessories — that one has to classify them as Full Dress.

“Fig. No. 1.–AN ELEGANT CALYPSO ROBE, made of rich imperial muslin of a beautiful light yellow, finished at the extreme edge in a line of embossed silver and gold, worked in light open flowers, ornamented down the front, and round each side of the train, which is sloping off from the bend of the knee, with stars worked in small pearls, fastened in the centre with a gold stud; the front and back is made all in one; the waist unusually long, and tight to the form, though cut in various shapes; this robe is worn over a rich white satin train petticoat, worked round the bottom with stars of pearls and dead gold, to correspond with the dress; the sleeves are white satin, made tight across the shoulders, and hangs in small folds down the arm, inlet from the bottom of the sleeve, and crosses to the back part of the shoulder with a wreath of embossed gold and silver in open needle-work. A small white Calypso cap, embroidered with gold. The hair is worn parted in waves over the forehead, and in small ringlets down each side of the face. Over the head is thrown, in graceful negligence, a long drapery of white Parisian net, tastefully embroidered into a peasant’s eye. Ear-rings and necklace of diamond; shoes white satin, spotted with gold.

“Fig. No. 2.– A dress and train petticoat of rich white Italian sarsnet, with an embroidery of grape vine and leaves, worked very light in gold thread, made open behind, and fastened with gold buttons down to the bottom of the train. The dress is made about a quarter and a half shorter than the petticoat, which is embroidered all round with gold lace about an inch in breadth; the back is made quite plain and laced in the middle with gold cord.  Sleeves of white lace over white satin, made tight to the form of the shoulder; the bosom is made entirely straight, drawn tight in the centre to the busk, ornamented with a wreath of small gold leaves. Head-dress entirely of hair, combed straight on the right side of the head, formed into knots on the top of the head, fastened with a diamond comb, and is finished with a profusion of small curls, down the front of the head. Bracelets of dead gold and diamonds round the thick part of the arm. Neck-lace and ear-rings of the same. Straw coloured kid gloves; white kid shoes trimmed with gold lace.