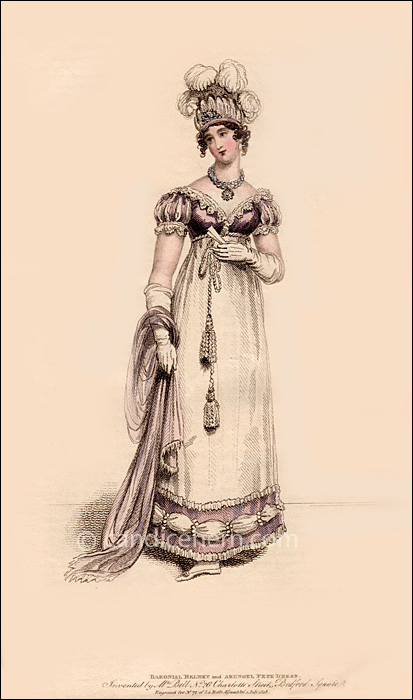 At this time, Mrs. Bell seems to have been a sort of fashion editor for this magazine, having some relation to the owner (probably daughter-in-law, though no one seems to know for sure). Whenever her own dresses were featured, which was frequently, the descriptions are amazingly effusive, as you will see, below.

I have found a reference an “Arundel Ball” in June 1815, but cannot be certain if this is the same “Arundel Fete” for which this dress is named.

“Skirt of white or coloured crape over white satin: a double row of the most novel and elegant trimming that we have ever seen ornaments the bottom: though perfectly in the antique style, it is, nevertheless, equally light and tasteful; two falls of the crape, which are set on full, are edged with silk in such a manner as to form the trimming in a style never before introduced. The body, which comes rather high on each side of the bosom, is shaped so as to display the neck and shoulders, and both body and sleeves, as our readers will perceive by the Print, are formed and trimmed in the most exquisitely tasteful manner. A superb cord and tassels confines the waist and ties in front. The Baronial Helmet, worn with this dress, is, without exception, the most striking and elegant head-dress introduced: the materials are white sarsnet or satin and white lace, disposed in a most novel and tasteful style, and superbly ornamented with feathers. Our Print will convey to our readers some idea of the effect, at once magnificent and simple, of this exquisitely fancied head-dress; but we must observe, that no adequate idea can be formed from description of the effect of the dress altogether. Necklace, bracelets. ear-rings, and small French locket of pearl. White kid slippers and gloves.”