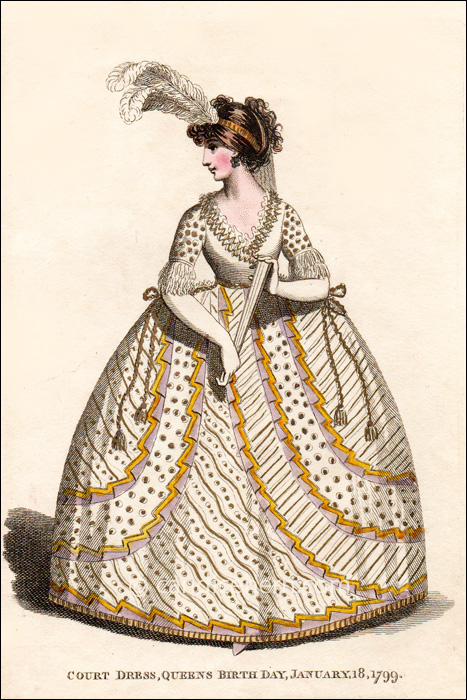 Fashions of London and Paris, January 1799.

The king’s birthday was always celebrated in June, regardless of his true birth date. (This is still true. The current monarch’s birthday is celebrated in June, though she was born in April.)  The birthday of the queen,  (ie the queen consort of the reigning monarch) was always celebrated in January.  The Drawing Rooms on these two occasions, held in the State Apartments in St. James’s Palace,  were invitation-only, and those invitees would have been of the highest-ranking nobility. Dress-makers pulled out all the stops when designing dresses for the birthday drawing rooms. The dresses were expensive, extravagant, and cumbersome. Read about the rules for court dress here.

Several ladies’ magazines of the period, including the Lady’s Magazine and La Belle Assemblée, provided extensive fashion coverage of the birthday drawing rooms, describing in some detail the dresses worn by various noblewomen, including the queen. This print shows the dress worn by Princess Augusta, the sixth child and second daughter of George III and Queen Charlotte, This publication, Fashions of London and Paris, published a print of the princess in a blue court dress for the King’s birthday in June of the same year.

It is difficult to see online, but this print is embellished with metallic gold paint throughout.

“This expensively finished Plate is an exact representation of the rich and beautiful dress worn by the Princess Augusta on the late Birth Day. It consisted of a white crape petticoat, richly embroidered with gold;  the body and train of gold tissue. The head dress in the Plate is that which was most prevalent at Court.”