The Fashions of London and Paris, July 1799.

This print is so wide (to accommodate the huge dress) that it had to be folded! Princess Augusta was the sixth child and second daughter of George III and Queen Charlotte. Though she was painfully shy, she was a favorite at court. A few foreign princes offered marriage, but the king refused all offers, and she never married. She died in 1840 at age 71. 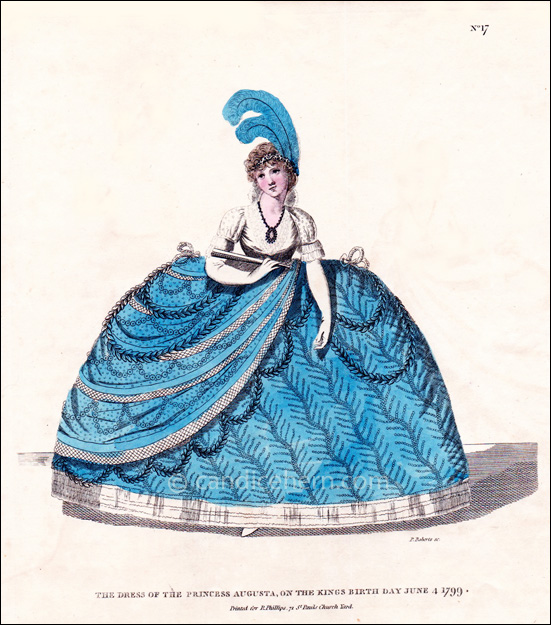 Her court dresses (along with her mother’s and sisters’ dresses) are often described in the ladies’ magazines, but this publication is the only one where I have seen her dresses in a fashion print. The same publication published the princess in a yellow court dress for the Queen’s birthday in January of the same year.

The dress is described in the magazine as follows:

“Description of the Dress worn by the PRINCESS AUGUSTA, on His Majesty’s Birth Day, the 4th of June 1799. The beautiful design of Mrs. Bruce, Milliner to her Majesty.

“Her Royal Highness was arrayed in a blue crape petticoat, richly embroidered with silver spangles in waved stripes, from the bottom of the left, to the top of the right corner of the coat, with rays of spangles darting from each side of the stripes. Over the right corner, flowed a blue crape drapery, differently embroidered with silver stripes, and covered with netting, edged with blue spangled ribbon, and scalloped with silver rings studded with spangles. A rich silver spangled lace, full plaited flounce, headed with silver trimmings, with elegant silver lace and laurel bows at the pocket holes. The whole dress was superbly ornamented with real silver laurel, in festoons. The body and train were of blue and silver tissue, ornamented with silver fringe, spangled crape Circassion tops, and silver bands to sleeves, with Brussels point ruffles.

“Her Royal Highness’s Head-Dress was a silver bandeau, and blue ostrich feathers; her neck was decorated with a brilliant chain which suspended a Miniature of His Majesty, set with diamonds.”

It is unusual for prints in this magazine to be signed by the engraver., but this one is signed “P. Roberts.” Percy Roberts was a London engraver and publisher who is more well known for his satirical prints.