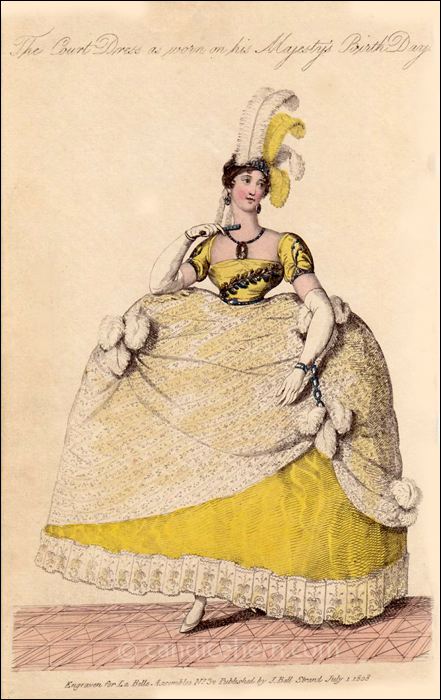 “Court Dress as worn on his Majesty’s Birth Day”

I realize, of course, that this was a Very Important Dress worn by a Very Important Lady, but it still looks ridiculous to me. The combination of the high Regency waist and the full hoop just doesn’t work. These odd costumes were worn for twelve more years, until 1820 when the new king George IV allowed that hoops were no longer required at Court. Bless his heart.

“Explanation of Lady Cholmondeley’s Court-Dress: A bright primrose-coloured sarsnet petticoat trimmed full round the bottom with point lace, and a rich drapery of the same, most tastefully festooned with diamond chains, and ostrich feathers in the form of the Prince’s plume reversed. Body and train of primrose sarsnet; the latter trimmed with lace, and the former ornamented with the most splendid diamond wreath to represent the oak leaf and fruit, placed obliquely across the front of the bust; the sleeves finished to correspond, and the bottom of the waist confined with a diamond cestus. Head-dress court lappets of point; a diamond bandeau and rich coronet, with four ostrich feathers of unequal lengths, most tastefully disposed. Splendid earrings of the oval form; necklace and bracelets also of brilliants. Gloves of French kid, considerably above the elbow. Shoes of white satin with silver trimming.”

The fashion commentary that follows lists all the ladies at Court for the King’s birthday, from the Queen on down, and describes each of their dresses.