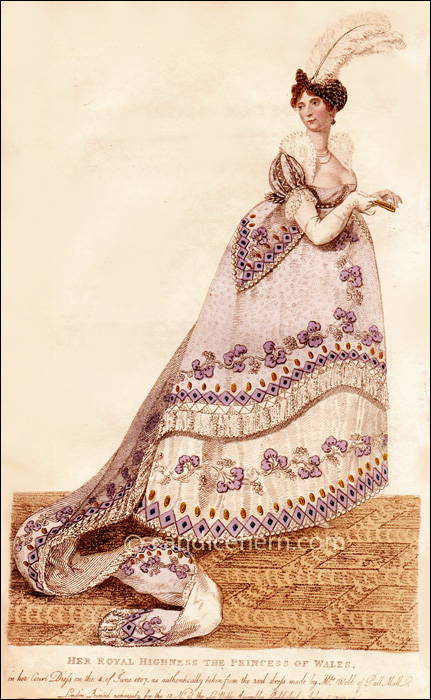 “Her Royal Highness the Princess of Wales in her Court Dress on the 4. of June 1807, as authentically taken from the real dress made by Mrs. Webb of Pall Mall.”

Though it is not mentioned in the magazine, this print marks an important occasion at Court. Here is a bit of background:

In 1806, a secret commission had been set up to investigate claims that the Princess of Wales had an illegitimate son. The princess had adopted several children and fostered them out to various families. In 1802 she adopted a 3-month old boy named William Austin, and kept him in her own home. In 1805, her neighbors, Sir John and Lady Douglas, fell out with her and laid many salacious claims at her door, including the fact that William was her own son. The commission interviewed several people, including servants who denied any evidence of a pregnancy, and the woman who swore she was William’s biological mother. The commission ruled there was no foundation for the allegations, but gossip persisted when news of the secret investigation was leaked to the press.

During the investigation, the princess was not allowed to see her daughter, Princess Charlotte. After the commission’s report, her husband, the Prince of Wales, laid down several rules: he and his wife must never be under the same roof; their daughter could only see her mother, under strict supervision, at her residence at Montague House, Blackheath, and never at one of his own houses, eg Carlton House or Warwick House. He tried to keep her away from Court, but his father, the King, was more sympathetic to the princess, and once the initial furor over news of the “Delicate Investigation” passed, he welcomed her to Court.

The opulent dress shown in this print is the one she wore when she returned to Court for the first time after the scandal. It is described in the magazine as follows:

“This dress, for taste and magnificence, stood unrivalled amidst the splendour and elegance displayed on the Birth-Day of our justly revered Sovereign; and we consider ourselves fortunate in having it in our power to procure a representation of it for our fair correspondents.

“The body and ground of the drapery was formed of a rich silver and lilac tissue, with a most superb border, composed of emeralds, topazes, and amethysts, to represent the vine-leaf and grapes. The train and petticoat of silver tissue; bordered all round like the drapery; and each terminated with a most brilliant silver fringe of a striking novel formation. Rich silver laurel and arrow on the left side, to loop up the train. Head-dress of diamonds and amethysts, tastefully disposed; with high plume of ostrich feathers. Neck-dress thew winged ruff, à la Mary Queen of Scots; sleeve ornaments to correspond. Amethyst necklace and earrings, with Maltese cross; diamond armlets and bracelets. White satin shoes, with rich silver rosettes. French kid gloves, above the elbow. Fan of Imperial crape, studded with amethysts and topazes.”

There follows 6 pages describing the court dresses of the Queen and all the royal princesses, plus dozens of other women of the nobility.