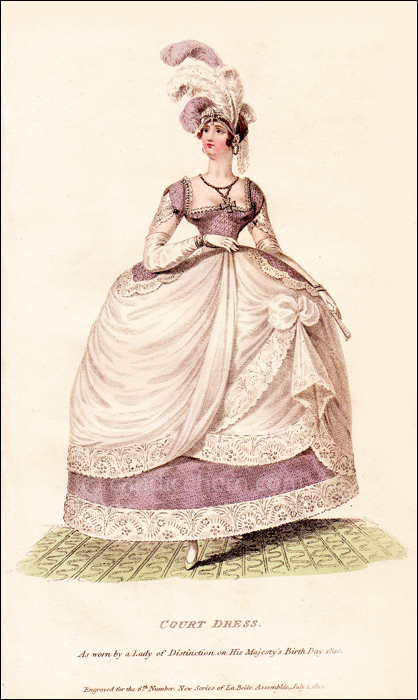 Most of the court dresses shown in magazine prints represent those dresses worn on either the Queen’s birthday celebration in January or the King’s birthday celebration in June. The days chosen do not represent the actual birthday of the monarch or his queen, even though George III was indeed born in June. But January and June birthday drawing rooms had become a tradition, and even today Queen Elizabeth’s birthday is publicly celebrated in June, even though she was born in April.

The lady depicted in the print is not named, though in the text listing those attending the Drawing Room, the dresses of several named ladies are described in detail. The dress in the print is described as follows:

“A lilac sarsnet train and petticoat, covered with silver net lace; the drapery of white crape, tastefully looped up in a bow with diamonds on the left side; the bottom of the petticoat, drapery, and train trimmed with a rich point lace; body and sleeves of the same, richly trimmed with lace and looped with diamond brooches; lace tucker; the head-dress a bandeau of diamonds, with a rich plume of white and lilac feathers; diamond hoop earrings, diamond necklace, with Maltese cross; bracelets of diamonds; white kid gloves; slippers of white satin.”