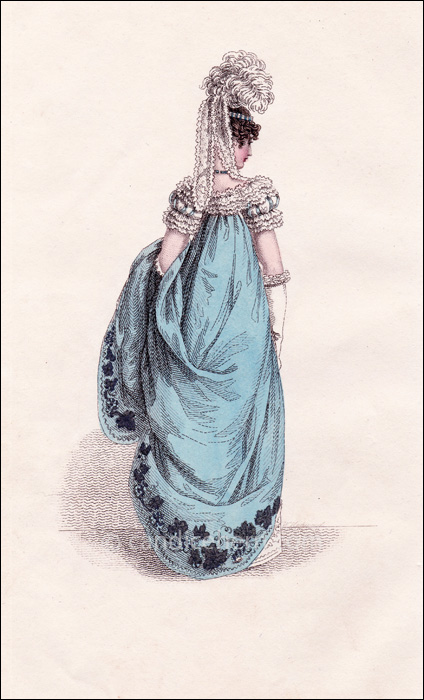 “Dress of the Court of France”

This print is copied from a print published in the French magazine le Journal de Dames et des Modes the previous year. La Belle Assemblée published several French court dresses during this period, and I like to believe that these prints were specifically directed to the English court where large hoops were still required as a part of court dress, despite how ridiculous they looked with the high-waisted fashions of the day. It’s as though the editors of La Belle Assemblée where saying, “See? They don’t have to wear hoops with their court dresses.”

“White satin petticoat, bordered with a rich work in silver lama of grapes and vine leaves. Body of silver tissue, with short sleeves of crape, ornamented with pearls. Falling tucker of crape, three rows, to correspond with the sleeves. Mantuan train of satin of a fine tyrian purple, pink, or ethereal blue, embroidered round the border in the same manner as the petticoat. The hair elevated on the summit of the head, and encircled with a bandeau of diamonds. A full plume of white ostrich and marabout feathers intermingled. Court lappets of fine Mechlin lace, edged with small pearls; diamond necklace and ear-rings.” 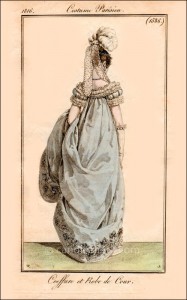 The original French print, from the Paris edition of Journal des Dames et des Modes, is shone on the right. It was published in the August 20, 1816 edition of the magazine. Note the small differences in the British print: the trimming at the hem is slightly different, the trimming on the lace lappets hanging down the back from the plumes is different, the plume is fuller, and the blue of the dress is darker.

The original painting was created by the popular Parisian artist Horace Vernet, (I am lucky to own one of Vernet’s original paintings for this magazine, which you can see here) and was engraved by Pierre Baquoy.