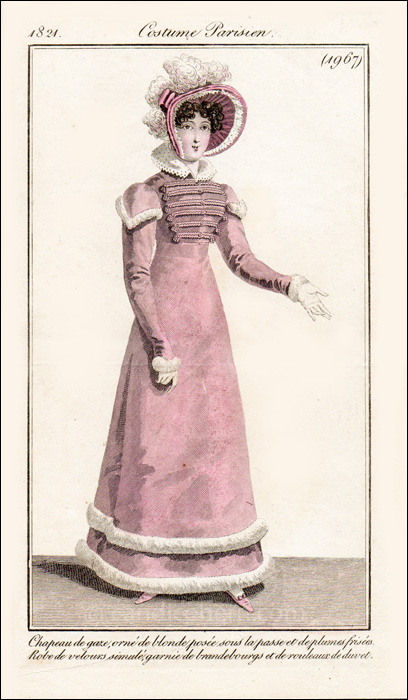 Although this appears at first glance to be a pelisse, it is not. The print title calls it a “robe,” so it is in fact a winter dress, not an over-garment.

The most interesting thing about this print, however, is that I also own the original watercolor painting by Horace Vernet upon which this print is based, as seen below. (The quality of the image of the painting is less than perfect as it was scanned from behind glass.)

The artist, who was employed by the magazine, created a painting of the model wearing this week’s fashion (this magazine was published weekly — or, to be more precise, every 5 days).

Once approved by the magazine’s editors, the painting was given to an engraver, who created a copperplate line engraving of the painting using a burin to cut the lines. Ink was then rubbed into the recessed lines of the copperplate, and removed from the flat surface. Moistened paper was placed over the plate and both were run through the rollers of an intaglio press. The resulting prints were, of course, mirror images of the original painting. The black-and-white prints were then hand-colored.

You can see that the softness of the watercolor becomes much more crisp and detailed in the engraving. The engraver also took liberties with the face, giving it more distinct, but rather generic, features than the painting, especially the eyes.

It is also interesting that though the painter includes his initials on the watercolor (H.V.), the engraver does not include them. This is unusual, as most of Horace Vernet’s designs in this magazine include his initials, which the engraver would have had to reverse on the copperplate so they would print correctly. Horace Vernet was a very well-known artist in Paris, and I suspect the magazine wanted to make sure readers recognized that a famous artist worked for them, and made sure, in most cases, that his initials were included in the print.  His famous father, Carle Vernet, also contributed beautiful designs for this magazine in its earlier days.