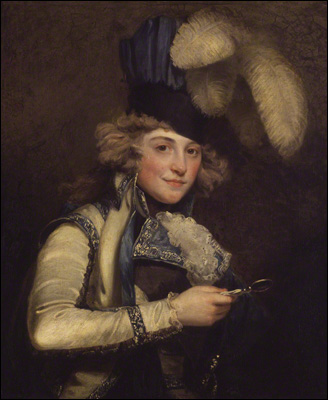 Born Dorothea Bland, she assumed the name of Mrs. Jordan when she became an actress. (There was no Mr. Jordan; she never married. It was a convention of actresses of the day to take on a married name as it was deemed more respectable.) A star at Drury Lane for almost 30 years, she was a great comedienne who was renowned for playing “breeches” roles, i.e. young men, or girls disguised as boys. Dora was a beautiful woman who attracted the interest of many important gentlemen. She bore 13 children, 10 to the Duke of Clarence, whose mistress she was for over 20 years. Like most of his royal siblings, the duke was constantly in debt, and Dora’s earnings on the stage kept the “family” afloat. He abandoned her in 1811 when his family urged him to make a legitimate, royal marriage. Dora died in 1816 in France, penniless and brokenhearted. When the duke became King William IV upon the death of his brother, George IV, one of his first acts was to commission a statue of Dora with two of their children.