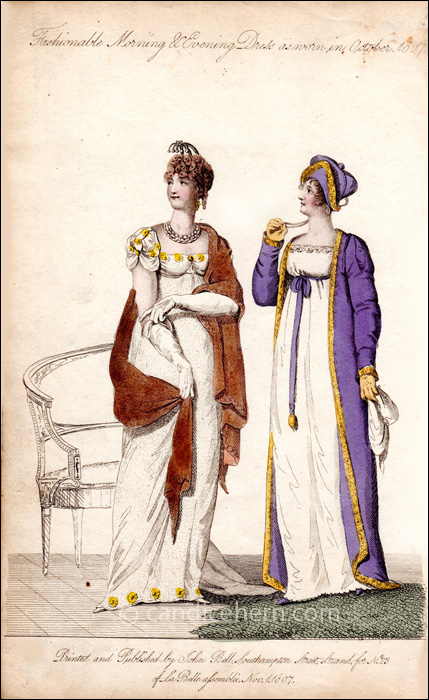 I’ve always thought the lady on the right is eyeing the other lady, thinking, “What the heck is that thing in her hair?” It’s an odd looking “diadem,” but I suspect it is en tremblante, ie it “trembles’ when she moves, creating sparkle and movement. The tremblante feature was very popular in jewelry of this period.

“No. 1.–AN EVENING DRESS. A round train gown of clear muslin, or leno, over white satin, tamboured in a snail pattern, and ornamented at the feet and round the bosom with rosets of gold, or coloured velvet; a full puffed sleeve trimmed with the same, and gathered in the centre of the arm with a topaz stud. Brooch and ear-rings to correspond. Hair confined close behind, and formed in irregular curls on the crown and forehead, with a few negligent ringlets on the left side; a diadem à-la-Chinese, composed of wrought gold and fine pearl; gold elastic, topaz, or pearl necklace. India long shawl, of a flame or orange colour. White satin shoes, and gloves of French kid.

“No. 2–A MORNING, OR WALKING DRESS. A plain round gown of French cambric, a walking length, scolloped at the feet; a plain square bosom, embroidered at the edge. A French coat of purple velvet, with long Spanish sleeve, finished all round with a border composed of shaded chenille. A Yeoman hat of the same material, turned up in front in a triangular form, finished at the extreme edge with a border the same as the coat, and ornamented on the crown with a raised button and rich cord and tassel; a girdle of purple ribband terminated with the same. Purple velvet, or kid shoes, and York tan gloves. With this dress is usually worn an embroidered shirt, with Vandyke ruff, or a chemisette of twill cambric, or small quilted satin, trimmed à-la-militaire.”