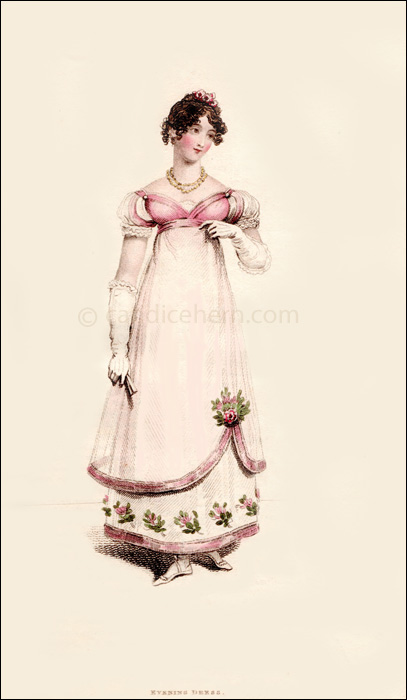 Mrs. Bell, whose designs are praised effusively in almost every issue of La Belle Assemblée, was in some way related to the magazine’s publisher, John Bell. It is thought she was his daughter-in-law. I am also convinced that she wrote most, if not all, of the fashion reports in La Belle Assemblée for at least a decade. No other modiste is so regularly mentioned or so generously praised.

Though the overdress (“tunic”) is described as white, every copy of this print I have seen shows the overdress colored a pale pink

“A white crape petticoat over a white satin slip, trimmed round the skirt with pink crape and artificial flowers; over the petticoat is a tunic of white crape. The body of the dress, as our readers will perceive by the Print, is perfectly novel and strikingly tasteful; it is pink crape over the white satin body of the slip, and the sleeve is an intermixture of pink and white crape. This elegant and simple dress is singularly well adapted to set off a fine shape to the greatest advantage; at the same time we must observe that even the most delicate belle can find nothing in its form to object to; it exhibits the native ease of the shape, but the bosom is shaded with the most scrupulous modesty. We understand it was invented by Mrs. Bell for a lady of high rank and elegant taste, and though but just introduced it is already in very high estimation. The hair is divided on the forehead, and dressed in light loose curls on each side; it is simply braided round the head, and ornamented at the side with an elegant half wreath of French roses. Necklace, ear-rings, and bracelets of pearl; white kid slippers and gloves, and white crape French fan.”