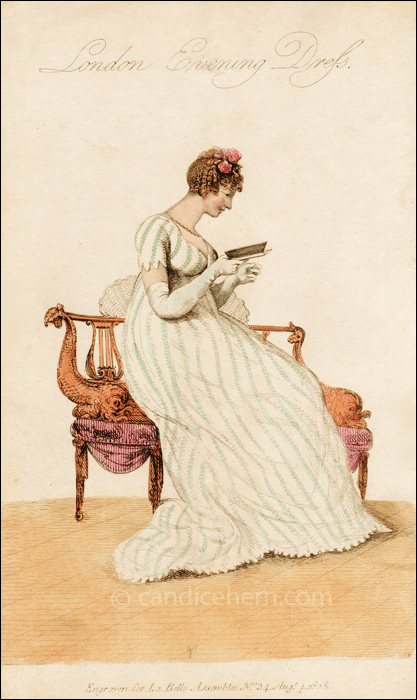 This very simple dress is made special by the stripes and the saw-tooth edges of the hem and sleeves. It is interesting to note that this edging is called in the text “antique scollop” instead of the more typical term “vandyke” or vandyking.”

The “French gloves” are also of interest. Most English gloves were loose fitting, but French prints always show tight-fitting gloves, as here. Also, we seldom see English evening gloves in any color but white, or, very rarely, yellow. Here, the gloves are shown in pale green, almost the same color as the stripes in the dress.

“A round robe of India muslin, Paris net, or leno, worn over a white sarsnet, or cambric slip; tamboured in a snail stripe, either in white or colours. The dress formed on the most simple construction; a plain back, and wrap front, sitting close to the form; a plain frock sleeve, edged with the antique scollop; a short train, finished round the bottom in a similar style. Hair brought tight from the roots behind, and twisted in a cable knot on one side, the ends formed in falling ringlets on the other; with full irregular curls. A full red and white rose, or ranunculus, placed on the crown of the head, rather towards one side. Emerald necklace linked with dead gold. Ear-rings and bracelets to correspond. French kid gloves above the elbow. Pea-green slippers of fancy kid.”