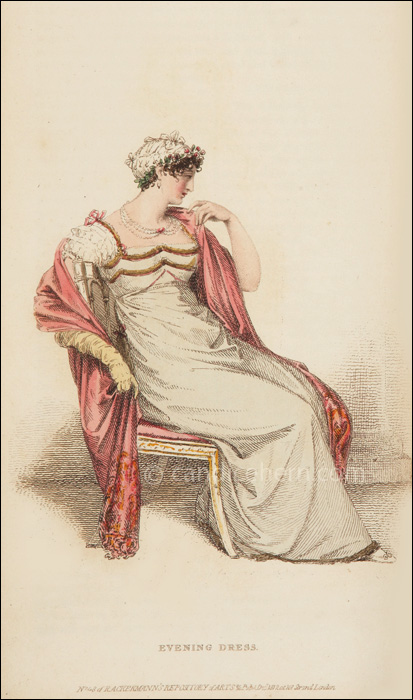 This is one of the few times I have seen pockets mentioned in a fashion print description. The other mentions are almost always with a riding habit. It is certainly unusual to see pockets shown with an evening dress. Though large pockets tied around the waist under a dress were worn throughout the 18th century, the narrow silhouette of the Regency era did not allow for bulky pockets underneath.  However, I have seen several extant examples of early Regency dresses with slits for pockets, so they must have been worn sometimes, but likely smaller and flatter than 18th century pockets.

“A round robe of fine Georgian cloth, a pale olive colour, with full puckered sleeves of white satin. The waist ornamented in horizontal waves of crimson and gold trimming; bows of the same at the pockets, and on the shoulders, and bordered at the feet to correspond. A French quartered cap, composed of satin and thread lace, ornamented with bows of net, and a wreath of barberries. The hair as a curled crop. A necklace consisting of a treble row of pearls, confined in the center with a large Ruby. Ear-rings and bracelets to correspond. Pale lemon-coloured gloves below the elbow. White satin slippers, with silver roseties; and a long occasional scarf of crimson Cashmire, richly bordered at the ends.”