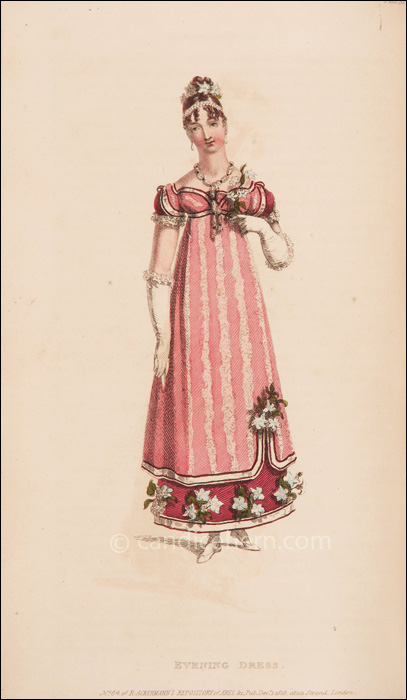 An interesting detail of this print is the gloves trimmed in ruched tulle. Gloves with such detailing at the top are most often seen with court dress, ie the most elaborate and expensive dress an aristocratic woman will ever wear. This would have to be a very special evening dress to be accessorized with this type of glove.

“A crimson satin slip, underneath a frock of three-quarters length made of silver-striped French gauze; the slip ornamented at the feet with clusters of flowers, and a narrow border of white satin edged with crimson ribbon; the frock has a border of white satin, edged to correspond, and is drawn up in the Eastern style, confined by a cluster of flowers. The body [ie bodice] of the dress has open fronts, with a stomacher, which are severally trimmed en suite; short open sleeve, to correspond with a quilling of tull [ie tulle] round the arm. Head-dress à la Chinoise, composed of pearl; the hair braided, and ornamented with a wreath of flowers. Ear-rings and drops, pearl; necklace, the French negligé. Gloves, French kid, worn below the elbow, and trimmed with a quilling of tull. Sandals, white kid.”

After the second pint is described, the following statement is added: 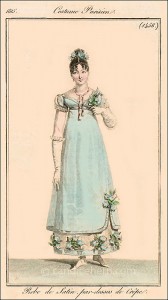 “The silver-striped French gauze is a novel and elegant article, which, fashioned by the ever-varying and approved taste of Mrs. Bean, requires to be viewed before a just idea can be received of it fascinating effect: it is allowed to the be the lightest and most splendid costume ever yet presented by the amateur to the votaries of fashion.”

Not to put too fine a point on it, but Mrs. Bean did not invent the style of this dress. The same dress, with a different fabric, was published in the Paris publication Journal des Dames et des Modes earlier in February of the same year. Even the hairdo, the ruched gloves, and the jewelry are the same. Click on the image to see a larger version.