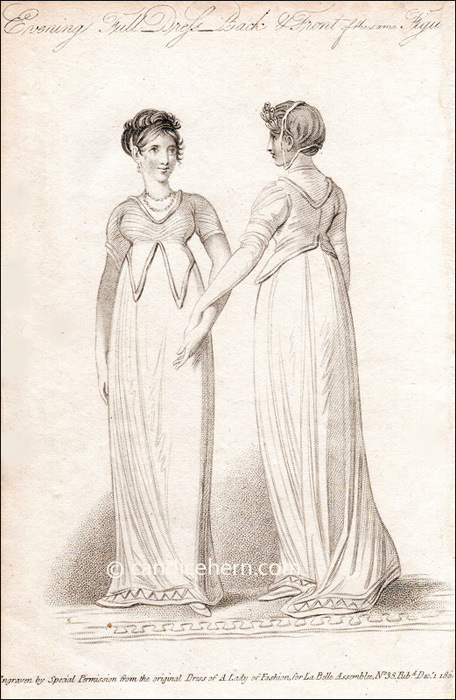 “Evening Full Dress, Back and Front of the Same Figure.”

In the first few years of publication, La Belle Assemblée offered two options for individual issues or subscriptions, one with hand-colored prints and one with uncolored black-and-white prints. Apparently the issues with uncolored prints were less expensive. I own both volumes for 1808, the third year of publication, and for each month the first fashion print is hand-colored, and the second is uncolored. I have often wondered if 1808 was a transitional year, offering a single option with both colored and uncolored prints. The next year, all prints were hand-colored.

In this uncolored example (I have 2 copies of this print, both uncolored) the following statement is included at the bottom: “Engraven by Special Permission from the original Dress of a Lady of Fashion.”

“Petticoats with short trains of white, or coloured crape, net , or leno, worn over white satin, bordered at the feet in a raised silver Vandyke, Andalusian vest, or bodice of white or coloured velvet, or of silver tissue.–The bosom and sleeve ornamented in oblique stripes of silver, and finished with a correspondent binding. Head dress of the first figure–The hair in tight folds on the forehead, and waved over the crown. Necklace, two rows of Chinese pearl, earrings and bracelets to correspond. Gloves, white kid, above the elbow; and shoes of white or crimson satin, embroidered in a silver lily at the toes.

“The second figure represents the back of the same costume, but the head dress is here formed of a small hood of silver net, which enclosing the hair behind, falls over the ears–In front is a full tiara of curled feathers frosted with silver. A silver diadem, or full bunch of winter flowers.”