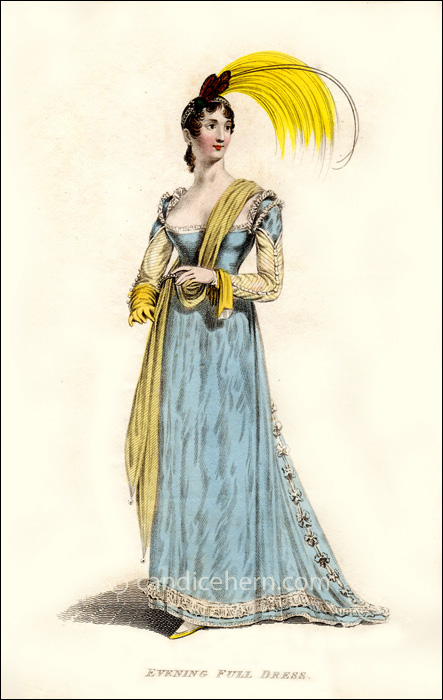 There is a lot about this dress that is odd for the period. The waist is unusually low, and there is a train. (The magazine’s section on General Observations on Fashion and Dress, however, notes that “unless for dancing,” trains are again in use.) And the size of the plume is rather extraordinary, though it bends sideways instead of straight up, as did those in the 1790s. The bright yellow gloves are also atypical for evening dress, when white gloves were more common.

“A pale blue gossamer silk dress, worn over a white satin slip; made with short train, and frock back; the hind part of the dress made entirely open, and tied down with small bows of white satin ribband; long sleeves made of pale buff gossamer net, and same as the gown, fastened down on the outside of the arm with small pearl brooches, the tops of the sleeves and bosom of the dress bound with silver edging, and trimmed with Valenciennes lace; the bottom and train is ornamented with a silver edging, a little above which is laid a rich Valenciennes lace; on the head is worn a bandeau of pearls, fastened in a knot on the right side, with Bird of Paradise plume. The hair in rather short full curls over the forehead, and curled in light ringlets on the right side of the neck. A scarf of pale buff silk (ornamented at the ends with white silk tassels) is worn fancifully over the figure, and confined in a pearl ring. Pearl earrings; shoes of pale buff satin; yellow kid gloves.”

This article is featured in: Regency Collections ~ Within Collections: Full Dress