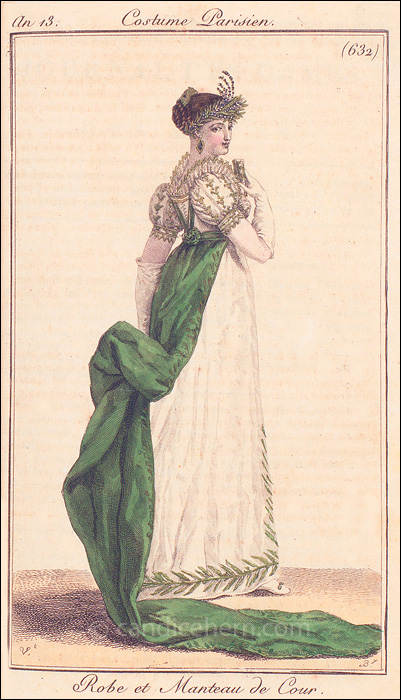 Before the French Revolution and the fall of the monarchy, French court dress was as exclusive and restrictive as that seen in the English court dresses on this site. After the Revolution,  court dress was neither needed nor wanted. It would not have been appropriate to re-introduce court dress in a Directoire “court” that was was now entirely republican. But when Napoleon declared himself emperor, the new imperial court provided him with a good excuse to resurrect court dress. Napoleon was keen to have his own, and his court’s, fashion appropriately reflect the importance of the new empire and its place in history. Although he favored a return to the formal court style of the the ancien régime, his empress Josephine knew that a return to court dress would require that it be fashionable and flattering as well as luxurious. The modern French woman would no longer accept large hooped petticoats. The new imperial court dress was a compromise between tradition and modernity, combining a fashionable high-waisted silhouette with traditional courtly accessories and opulence.

The court dress shown here is an excellent example of the new imperial court dress for women. The high-standing color, called a Médicis collar, harkened back to the ancien régime, while the high waist and short puffed sleeves are very much a modern style, which soon became known as the empire style. The elegant ornamentation of the dress and long mantle, the fine silk embroidery, and the high jeweled tiara add the opulence desirable at court.

Although many European courts held on to the old styles, the new French imperial style began to shape court dress throughout Europe, especially as Napoleon placed his own relations on several European thrones. English court dress did not give way to the French style until the death of George III. When his son, George IV, took the throne in 1820, he declared that ladies were no longer required to wear hoops at court.