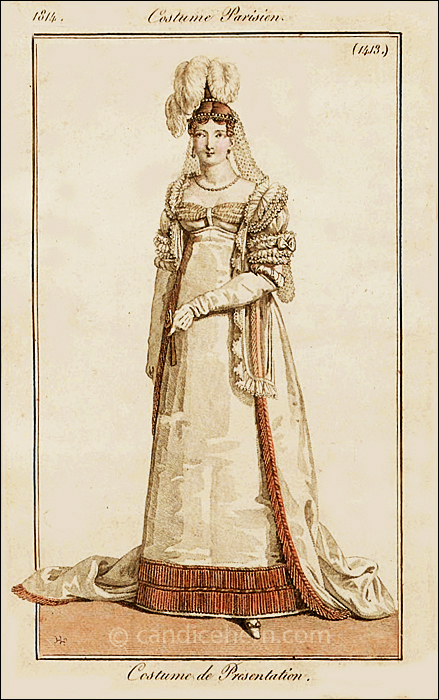 This dress would have represented one of the early court dresses worn at the court of the restored Bourbon monarch, King Louis XVIII, who came to the throne after Napoleon’s first defeat in April 1814.

This French magazine often included prints of court dresses during Napoleon’s reign as emperor. These prints were generally titled “Robe de cour” or “Costume de cour.” The fact that this print is titled “Costume de Présentation” indicates that presentations to the monarch had resumed, just as it was done in England and other European countries.

The French court costume during Napoleon’s reign, and Josephine’s influence, had taken traditional elements of court dress — trains, lappets, plumes — and incorporated them onto a more modern and more fashionable silhouette, with high waistlines and narrow skirts. The new Bourbon court continued this style, and did not impose the old-fashioned hooped skirts still required at the English court.

This court dress shows a trained robe over a dress, both appearing to be white satin and trimmed with gold fringe, with lace lappets hanging from the hair, and the traditional white plumes. The bodice is fairly simple, but the sleeves are extremely complex, with multiple layers of ruffles and a bow. The gloves also look to have some sort of ruffle or ruched ribbon adornment at the top.

The magazine tells us that the entire court ensemble was made by Madame Hypolite, and that her husband created the hairdo.

This print is signed by Horace Vernet, a well-known and very popular artist in Paris at this time.