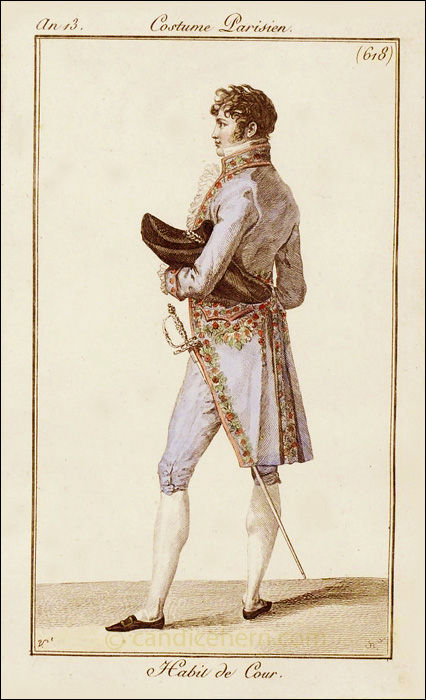 This print shows a French gentleman dressed for the Court of Napoleon. Paintings and extant clothing for the English court of the same period show very similar costumes. Court dress for men at both the English and French courts had long favored elaborately decorated military uniforms. But even for men who were not entitled to wear military uniforms, the prescribed court dress has a very military style: long-tailed coat with high standing collar and no lapels, matching knee breeches, white silk waistcoat, silk stockings, buckled shoes, court sword, and bi-corn hat (carried, never worn) known as a chapeau bras. The coat and waistcoat were most often velvet, and highly embroidered. This “court suit” was developed in the reign of George I in England, and remained almost unchanged until the late 19th century. Very specific court dress regulations were laid down in 1810 by the Lord Chamberlain.

Our French gentleman wears a blue court suit with beautiful embroidery, a costume that would have been equally appropriate at the English court. The cut of his coat, and his hair, offer a nod to modern fashion, but for the most part, it represents a style that had not changed in almost 100 years.

This print was designed by Carle Vernet and engraved by Pierre Baquoy.