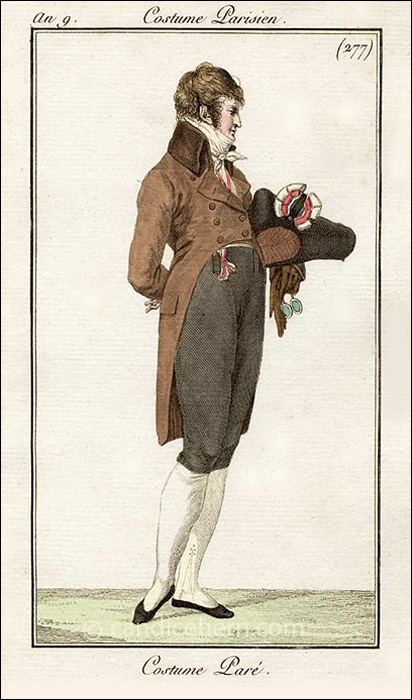 I have been unable to find a period definition of Costume Paré. Contemporary idiomatic definitions often include “decked out.” Whenever the term is used in a print description, the ensemble shown is clearly for evening, but not necessarily full dress. Half dress is often clearly indicated by the term Demi-Habillé. So, perhaps Costume Paré is somewhere in-between, like Half Full Dress.

This ensemble would have been worn in the evening  for a formal event, or perhaps to the opera or theater. The latter is suggested by the opera glasses, or lorgnette, in the gentleman’s left hand.

The coat is cut high in the waist, as was typical of this period, although this example is a bit exaggerated in the manner of the Incroyables. Generally, especially in England, one would see more of the waistcoat below the edge of the coat. But here, the red-trimmed white waistcoat is unusually short, with very little showing below the coat. The black knee breeches are extremely high-waisted, again in the manner of the Incroyables, cut high enough to be completely covered by the short waistcoat and coat. The high-standing collar of the coat and the neckcloth tied high at the throat is typical of the period, and not exaggerated.

Besides the lorgnette, the gentleman is holding his right-hand glove in his left hand, and a tricorn hat tucked under his left arm. Full dress generally called for a chapeau bras, that is, a formal hat carried under the arm but not worn. However, most chapeaux bras were bicorn hats, which were much more easily tucked underneath an arm. This tricorn hat looks like it was meant to be worn, especially as it is adorned with a cockade.

Note also the simple but elegant clocks on his white stockings.