Fashions of London and Paris, February 1804. 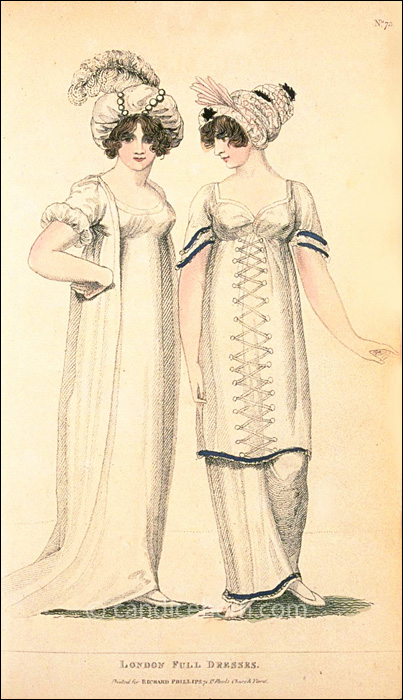 The turban worn by the lady on the left will be of particular interest to Jane Austen scholars. In one of her letters to her sister she mentions wearing a “Mamalouc cap,” and what she meant by that has been puzzling scholars for years, Here is the passage from the letter in question, sent from Jane to Cassandra on January 8, 1799:

“… I am to wear a Mamalouc cap … It is all the fashion now, worn at the Opera, & by Lady Mildmays at Hackwood Balls – I hate describing such things, & I daresay you will be able to guess what it is like.”

We all wish she had made an attempt to describe it! But I would like to suggest that it may have been something like the turban in this print, called in the text a “Mamaluk turban.” Though Jane Austen does not use the term turban, we do know that head-dresses made of fabric, with no straw or other stiffening, were generally called caps. So perhaps Jane’s cap was of a turban-like style.

Many fashion prints of this period include Mamaluk (variously spelled) cloaks and robes and other accessories. After Nelson’s great victory over Napoleon at the Battle of the Nile at Aboukir Bay in 1798, many fashion trends suggested an Egyptian or Middle Eastern style. These styles, or at least their exotic names, continued for 6-7 years after the battle.